I wish I could say this was the end of 2020, but we still have a few days left to go.  Although, saying that reminds me that I have a boatload of year-end stuff to do this coming week.  But we're not here to talk about what's ahead, are we?

I wrote every day last week for a total of 8531 new words.  Duke Noble is now sitting at 28536 words and 96 pages.  Not sure how long this one will be overall, especially since I feel like I'm ramping up toward the climax.  :shrug:  If it turns out to be a novella instead of a novel, I'm okay with that.  It'll be tight without a lot of fluff.

In marketing news, I've been working pretty steady on posting about the sale to FB and MeWe.  I've moved a lot - for me - of free copies of Wish in One Hand that I hope will turn into sales of the other books once those copies get read.  And I've sold 3 sets of the entire series.  Today's the last day for all of it, so we'll see.  I haven't seen any page reads from this.  Or from the SCIU sale earlier in the month.  Is KU not a thing anymore?  :shrug:

Last week, I finished a couple of good books and DNF'd a dud.  I'm pretty close to finishing my final goal of 90 books for the year.

In baking news, I made an apple cranberry crisp using a different recipe.  It's pretty good.  I also made a double batch of applesauce bread.  For Christmas, I didn't bake anything but I did do steak with sauteed portabello mushrooms and sauteed shrimp.  Hubs declared it a winner.

We didn't do anything for Christmas.  I called my mom.  Hubs called his mom.  I got a Merry Christmas chat message from Owl.  A certain awesome person - she knows who she is - gave me Black Rifle coffee for Christmas.  Yummers.  It didn't arrive until yesterday, but that's okay because it gave me a whole other day to celebrate.  I made a pot yesterday afternoon and we sat around drinking coffee and smoking and playing poker.  Fun times.  I also made a pot of it this morning.  And it came in a OD green bag with a big red cross on it - emergency medical coffee.  Mobile Army Surgical Coffee.  It gave me a happy.

Speaking of arriving yesterday, I finally got the Christmas card from my Mom.  And two other Christmas cards.  And my paycheck that was late arriving.  No word on whether my nephew-in-law in the Navy every got the package my sister sent him back in mid-November.  Of all the mail that needs to get where it's going, holiday packages for the troops should've been a priority for the USPS.  Anything with an APO address.  Seriously shouldn't have been that hard to get the stuff to the troops.  Gah.

In yard news, a cedar just off the yard has begun falling over.  The thick, wet, heavy snow that turned to ice last week was too much for it.  The root base snapped on the uphill side and now gravity has a hold of it. 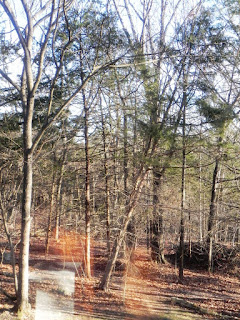 Not the best picture, but if you look between the reflections, you can see how the trunk has tilted.  It used to be as straight as the other trees.  =o(  I feel like one big squirrel leaping onto it at the right time could push it over.  Sure, it's just one of many trees, but I love my trees and I hate to see any of them die.  On the upside, this could be the key thing that gets me a chainsaw.  When it falls, it'll block off a couple of trails, and we can't have that.  Bwa ha ha.

In other news, it appears that Pierre has moved on.  The leaf litter we put all around the wood pile hasn't been disturbed and the stink is dissipating.

The deer are still coming in bigger herds than usual.  And we've been seeing an old buck lately.  Not anyone we know (we think).  He's lost his antlers already and he looks kind of sad.  I think if this ends up being a harsh winter, we'll lose him.  Everyone else is looking good, though.  Loads of healthy does and yearlings and fawns.  The cycle of life continues on the Sanderson homestead.

How's things in your life?  Did you have a nice Christmas?  Get anything good?