It's Sunday again.  How did that happen?  Blerg.

Okay, so Tuesday I was sitting here playing poker when I suddenly felt the urge to go back and read what I'd written on that noir thing I was doing at the end of the summer.  I read through the 7800 or so words I had and I added some stuff and tweaked some stuff and when I got to the end I wanted to keep writing.  So I did.  By Friday night, I had written exactly 5000 words.  (Which I mention because hitting that number unintentionally is something I could never do again.)  I wrote again last night  - 5th day in a row - which brings my word count for the week to 6195.  Not bad, if I do say so myself.  And I gave the book a name... kinda.  Duke Noble, Private Investigator.  I rolled over 14K words last night, so it's all good.

Also, my brain is sparking on this story all over the place, which is something that hasn't happened in a while.  Be nice if I could sleep, too, but hey, story.  But last night's mental free for all gave me some ideas for the pivotal 'reading of the will' scene I have to write today.

No marketing or editing (other than the minor stuff I did for Duke).

I did some baking this week.  I did a chocolate oil cake and made peanut butter frosting to go with it.  The frosting turned out awesome, but I didn't use a recipe.  I just threw things together until it was the taste and consistency I wanted.  Unfortunately, the cake turned out overbaked - even though I baked it exactly 40 minutes like always.  Not sure where I fell apart there.  I also made drop biscuits last week using my favorite recipe for rolled biscuits.  They turned out pretty yummy.  Would've been better if I hadn't been distracted by Perry Mason and had taken them out of the oven when the timer went off instead of a couple minutes later.  Not burned exactly, but a lot browner than I intended.

Wednesday, I got the Christmas cards out.  Thursday, I put up the tree. I played Christmas music during both of those tasks.  Still not in the mood for Christmas movies, though.  Here's this year's tree: 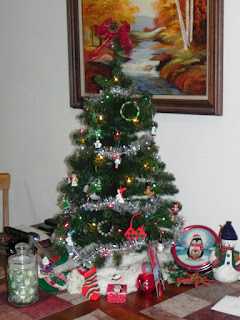 Pretty much looks like last year's tree. I think I put more stuff around the bottom this year to make it festive - since, ya know, we never put prezzies under it.

Other than that, there was the Kira vet thing I detailed on Tuesday's post.  Kira is getting better with the respiratory thing.  And she remained constipated until last night.  Nuff said on that.  Except right now, she's decided she doesn't like ANY of the flavors of food we currently have in the house.  Tough luck for her because I'm not due to hit the store until tomorrow.  Unless...

We woke up this morning to the weather places predicting a potential big snow starting today.  If we get the 3-6 inches some places are predicting, then Monday's trip south could be postponed.  We still have plenty of food available for us and the cat.  If she doesn't like the food we have, she'll go hungry bow bow bow.  (This morning I woke up to her gorging herself on the food she wouldn't eat last night, so there's hope.)  The only thing we'll really need if the weather takes a shit, is corn for the deer.  Cross your fingers the forecast is wrong because those big babies get hungry and then they show up in our front yard, picking over the birdseed and getting generally obnoxious. 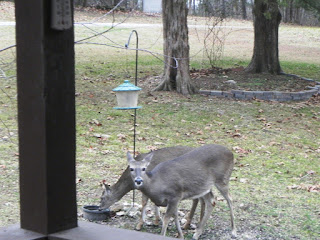 And lastly, I did get a couple walks in last week.  I haven't weighed myself since 11/25, though, so no clue whether I gained, lost, or held steady.  It is what it is.

How was your last week?