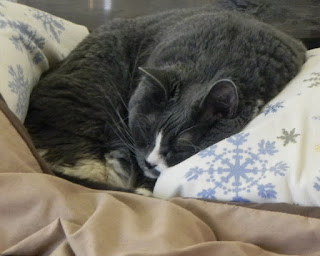 In the summer of 2003, I got the idea that we needed a cat, so in the days leading up to Owl's birthday, I went online to some local rescue sites.  (Local being the Salt Lake valley at the time.)  On one website, I saw two cats that sparked my interest.  One was a yellow tabby and the other was a gray and white.  For one reason or another, I called the rescue agency about the gray kitten.  Her picture made her look like she had the right kind of attitude.

Within a week, the rescue agency brought the kitten by my apartment to introduce us.  The woman set the kitty down once she got inside, and before the 'meet and greet' was over, I knew.  I asked the woman if she could just leave the cat with us, wrote a check, and we had this tiny, slim kitten.

The woman told us the kitten had been left with her siblings in a box outside the pound, sans the mother.  The pound tried keeping the three-week-old kittens alive with wet cat food.  The rescue agency swooped in and saved them.  For ten weeks, this particular kitten had been fostered in a home with dogs.  Now she was with us.

We had no idea what to name her.  I made a list of possible names and narrowed them down and let Owl choose.  For the first few days, her name was Calliope.  But that didn't suit her.  She then became Kira.

We went back 13 weeks from the day we got her and chose May 7th as her birthday.

When Hubs and I were talking about getting married, I told him I had a cat.  His reaction: Oh.  He wasn't against cats, per se, but he wasn't a big fan either.  It wasn't too long before she could be found curled up on his chest sleeping.  She won his heart without even trying.

Born in Utah, moved to Colorado with us, moved to Missouri with us.  She hated the moves, but she rolled with the new locales.  She was a cruiser-cat.  Totally laid back.  The easiest cat in the world to own and love and care for.

In the end, we chose to let her go.  It was time.  She was tired and old and was ready to sleep.  She always did like sleeping best of all.

Kira was one hell of a cat.  She will be sorely missed.  Writing this post yesterday evening, I was struck by how surreal it is in the house with no Kira.

These last few weeks were trying on us all.  And a great deal of our time was spent thinking about her, tending to her, carrying her around... doing our damnedest to return her to health.  It just wasn't to be.  And now that she's gone, the void is greater than I would've imagined.

The house is quiet in a whole new way.  She was never a vocal cat... unless it was dinner time... but you could hear her breathing... and snoring... somewhere in here at any time of the day.

Her things are still where they always are and there they'll stay until they start to disappear by dribs and drabs.  Sometime soon, I will take her uneaten food to a local pet rescue, along with any of her other things they might be able to use.  Paying them in kindness for the kindness a rescue agency in Utah showed her.

We won't be coming home with a new pet.  It's too soon.  It might always be too soon.

Seventeen and a half years is a long time to be with a pet.  A friend.  A furbaby.  Kira Kitty, Queen of All She Surveyed.

Soon, her ashes will come home and she'll have an honored place on one of the shelves.  Like Max does.  Except I can't put her next to Max.  She hated Max.  She would consider it a personal insult to spend eternity next to him.  Goofy cat.

Goodbye, Kira.  Thank you for being part of my life.  Our lives.  You'll be in our hearts forever.