Beating My Own Drum

This morning, I'm going to beat my own drum.  I worked hard for it, so no apologies.

I spent the last several days helping sort their garage into keep and throw.  The 'throw' stuff ended up in a trailer to be taken to the solid waste transfer facility (who will then take it to the dump).  Yesterday was the day it went.  The trash in the trailer weighed in at 2400 pounds.  And most of that I had a hand in.  Over a ton worth of junk, thrown in over the course of two days and the third morning wherein we dragged an old nasty piece of carpet over the whole thing so nothing would fly out during transport.

Here it is before the carpet...

I forgot to take a pic after the carpet went on.  But trust me when I say it added at least another hundred pounds or so.

I am a goddess.

A tired and sore goddess, to be sure, but still a goddess.

Today, a covered trailer is being delivered and we'll start moving the 'keep' stuff into that for storage until they're ready to move it to their new home. It's bigger than it looks from this angle.  I'd say about 350 sq ft worth, but I'm bad at eyeballing distances. 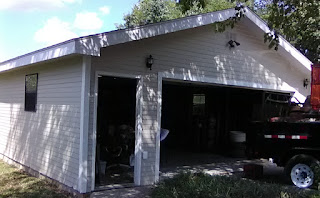 Also bigger than it looks from this angle.  It's a deep 1.5 car garage and it was mostly dark brown, so two coats on that puppy.
None of the above includes the packing we've done inside.  Or the two trips we've already made to the thrift store with a packed-full, four door mid-sized sedan.  (All kudos to the gals at St. Vinny's who helped us unload.)

Needless to say, Hubs and I have both been deities up to this point.  Especially considering our combined ages equal 117.  Add in my BFF and her husband and the total age is 240.  Old folks can still kick ass.

I've been at this an average of 4 days a week for the past 4 weeks.  It feels good to actually be physically productive for a change.  Yes, even as tired and sore as I am.  Bruised but unbroken.  Go me.

What's up in your world?  Any drum beating of your own you'd like to do?