Videos of police lip-syncing and dancing... I think they're awesome.  Those guys do so much for us and their jobs are so stressful, they deserve to have a little fun.  Every one I see makes me smile.  (I watched a new one yesterday morning where the lip-syncing was so horrendous it should've been a crime, but it was still fun to watch.)

I took pictures using my phone for the first time.  They didn't turn out too bad. 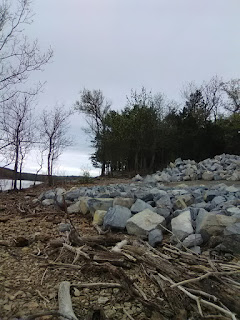 This is of the new boulders they put at my favorite fishing spot and in the foreground is the approximate location where I fell on my ass.  (I took the pics so Hubs could see what they did to the place.  Note: I am not happy.)  You might not be able to tell, but some of those gray rocks are 2-3ft across/high.
I have static in my phone.  Sometimes.  I thought it had cleared up and then I was talking to someone and it started back up again.  I really need to call CenturyLink.  But I hate calling them.  I really wish someone else in my neighborhood would make the call, but they don't.  It seems like I'm the only one who ever bothers.
By the way... if you ever talk to me on the phone or in person, I have this thing I do where I stop and start and pause a lot.  It's because my brain is searching frantically for the next word.  And sometimes, in its haste to get a word out, it inserts whatever word it came up with, even if it's the wrong word.  The longer I talk, the worse it gets.  Hubs and Mom are used to it.  To everyone else, I probably sound like a moron.  This is partly why I rarely get into long conversations.
There's a new gal at the bank.  Okay, she's been there for a few months now.  Anyway, I took my RHI proof with me to the bank to show my BFF and happened to take the time to chat with the new gal.  Turns out she's a voracious reader and wants a copy of Duke, too.  Yay.
Speaking of copies, Amazon said I'd have my author copies between the 14th and the 16th.  I got a shipment notification from the Big-A last night.  They sent one book and it won't be here until the 20th.  The other 4 books I ordered?  Who the hell knows?  I have three books already spoken for.  Dammit.   (Okay, I just looked at it again and NOW it says they sent 4 books.  Derp.  Where's the 5th?)  I wonder what they would've done if I'd ordered 100 books.  *
Anyway, I probably should go start my morning.  Hubs already has laundry going and I feel like a slug.  More coffee!  Stat!
What up in your world?

*Okay, I think I figured it out.  There are two shipment notifications.  One for one book and one for four books.  They shipped them all, but in two different packages.  Maybe.  I guess I'll find out Tuesday.  :eyeroll: