Seventeen weeks into 2021 and it's getting weirder by the day.  By the way, it's National Zucchini Bread Day.  As if it wasn't weird enough to have that day in freakin' April, I went looking for info on it and one site says zucchini bread was invented in the '60s by hippies.  Umm...  I think my grandmother was making zucchini bread way before that.  (It also said that's when banana bread was invented.)

Anyway, it wasn't the best writing week I've ever had, but writing did happened, so that's a win.  4332 words for the week.  And then I hit a mental block.  I figured it out last night when I should've been sleeping.  I need to delete the end of that last scene and the block should disappear.

I tried to do some marketing, because the Model Curse books are on sale, but I got crickets and then I got discouraged.  Then I went crickets.

Only one book read last week, mainly because I'm still working my way through that NF.

It was kind of a baking bonanza, though.  I make drop biscuits, oatmeal raisin apple cookies, and chocolate walnut upside down cake.

I did something active 6 days out of 7, but not hugely active things.  Spot cleaning, some yardwork, a little gardening, and fishing.  Weight 184.6. 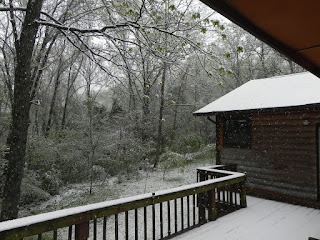 I was out there in it trying to knock snow off the cedars and the bushes and my plants, because the snow was heavy enough to drag everything toward the ground.  I got super wet and freakin' cold and it was an exercise in futility.  Although, I think it saved the peonies, so that's something.  All of our black walnuts trees are hurting.  Their new leaves couldn't take the cold and nearly all of the leaves are black and curled up/crunchy now.  The big trees will survive.  The little trees?  Time will tell.

My container garden was inside, so it's all good.

I finally got my filing done.  I don't think I filed anything after the chaos started, so there were months worth of bills in a stack on the top of my printer/scanner.  I can see the top now!  Yay.

The windows still aren't finished.  I did another third of them and then my arms said 'oh, hell, no'.  I'll get the last three windows done today - the spare room and Hubs' bathroom.  Then I can cross that off my to-do list until Fall.

I think that's it.  There may have been other stuff.  I'm kind of manic right now, using busyness to avoid the news and the world.

How are things going for you?