Last week was annibirthary week.  Basically, I ate a lot and not much else got accomplished.

I didn't write anything or edit anything or market anything.  I did set up sales and freebies for the coming week, though.  I'll talk more about those when the time comes.  First up, though, UNEQUAL will be free Monday - Friday this week.  I think, pre-Memorial Day is the perfect time to read about a possible future scenario, don't you?   Then, for Memorial Day, BLINK OF AN I, my other glimpse of the future, will be free from the 29th through the 2nd.  After those, sales will begin.

I didn't bake anything last week.  Hubs baked!  He made me a birthday cake.  Yay.  It was boxed with pre-made frosting, but I appreciated the effort nonetheless.

I finally went fishing on Thursday.  Then Hubs and I went together on Friday.  Thursday, I caught a spotted bass.  Caught the exact same bass on Friday in the exact same spot.  I knew it was him because I had to cut the line off on Thursday and he was still sporting it.  (For the record, it is my understanding this is the best thing to do for an undersized fish that has swallowed the hook.  Eventually, the hook will corrode and disintegrate.  Better for them then trying to yank a hook out and cause extensive damage to their innards.)  Anyway, I named him Rupert before I let him go and told Hubs if I caught him a third time I was keeping him because he obviously wanted to go home with me.  I did not catch him again, so I didn't have to be a liar.

Other than fishing, my activity level this week sucked.  I only did one other thing and that was sweeping the deck so I could rearrange the container garden.  Here's how that looks, btw: 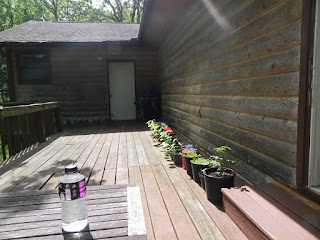 If you want to see more of that, go over to my gardening blog.  I didn't bother weighing myself, what with all the eating and lazing about.

Looking ahead, I really need to kick myself in the ass and get back on track with both my writing and my non-writing.  Putting words down, getting exercise, being more careful with my eating, doing some real marketing so I sell books... those kinds of things.  We'll see if this morning's gung-ho attitude carries forward when we come to next week's Sunday Update.

How are things in your world?  Did you have a good Week 21?