You know me.  I love baseball.  But I swear if the players don't knock this horse shit off, I'm done with it.  I loved football more and I quit that without too much pain.  I don't even miss it anymore.  Next up, golf.  All this COVID crap has shown me I can live without sports.

The guinea fowl now wait for Hubs to do his morning 'feed the critters' thing.  They are his faithful subjects.  I have three of them named now - Harry and Henry (previously Harriet and Henrietta, but then I learned they were males) and Pie (short for Piebald - also male).  Henry's light, Harry's dark, and Pie has white on his breast.  They travel together and have enough differences (all guineas pretty much look the same) that I can tell who they are.  There's also a trio of nearly identical guineas - all the same dark shade of gray.  Two males and a female.  And the female limps, so I know when it's THAT particular trio.  I think I'll name them Bing, Bob, and Dorothy.  They're off on the road to Morocco.  ;o) 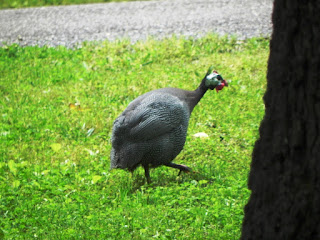 I think that's Dorothy.  (Smaller wattles is the key to gender identification in guinea fowl, I guess.)

I've been distracting myself with playing free online poker again.  No worries, though.  I can only play for ten minutes at a time before my computer starts to whine from the overload.  Then I learned I can play free slots at the same site without the drain on my system.  Totally mindless entertainment.  I went through 250K chips yesterday, though, so now I have to wait and build my acct back up again.

I don't know about you, but I'm sick of virtue signaling.  Then again, I'm pretty much sick of everything right now.  Like I've seen on FB, I think we need to turn 2020 off and back on again, and see if that fixes the problem.  We need some sort of reset on this year.

Tropical Depression Cristobal was a non-event here.  We got like an inch of steady rain overnight.  :yawn:  Right now, we're getting more wind from some thing blowing out of Oklahoma than we did with big, scary Cristobal.

On a walk last night, we saw a squirrel that was dead in the road.  Flat... and more than that, it's spine was laying about 3 feet away from it.  Which I thought was cool.  Owl was grossed out.  On the way back, we had to pass the squirrel again.  I had Owl walk as far away as possible and look into the field as she passed it.  I took a better look.  The animals had definitely been busy on the carcass.  I won't gross you out, too, but I still thought it was pretty interesting.  I'm weird that way.  For years, I had a cat skull one of my brothers found long ago.  Not sure where it went.  Lost to one of my many moves, no doubt.

Okay, on that note, I should probably wander off somewhere and let you enjoy your day.  Have a good one!  And tell me what's going on with your this n thats today.

Updated to add:  I woke up this morning to learn that A&E cancelled Live PD.  Those fuckers.  I'm beyond pissed.