I've been quiet this week.  It's not that I don't have anything to say.  It's that I'm afraid if I say anything, the gates I'm keeping everything behind will shatter and it will all come pouring out, causing death and destruction to anything below the dam.  And no good will come of it.  Shakespeare said it best through Hamlet: Whether it is nobler in the mind to suffer the slings and arrows of outrageous fortune or to take arms against a sea of troubles and by there opposing, end them.  I'm going with the former.  For now.

The deer are fat pregnant.  And they're starting to distance themselves from each other, so they're coming for food in singles or, when there is a larger gathering, it's all young does.  The big doe with the two buck yearlings has kicked her boys out of her general area, which means the boys aren't coming around anymore.  =o(

My roses went a little crazy this year... 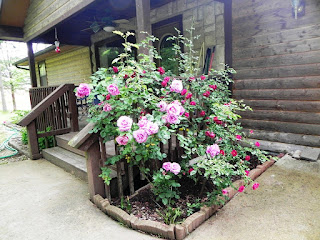 The front bush is still cultivated.  The back bush went feral a few years ago (its original cultivar was yellow).  There was a third bush next to the house, but it gave up the ghost last year.  Those two?  They thrive on neglect.  Other than dead-heading them, I ignore them and they're loving it.  Still, I do have them both tied to the porch so they don't take over my parking space.

Mom made it back to the office yesterday.  Poor lady is up to her ass in alligators after being trapped at home since mid-March.  I mean, she did a lot of work from home, but there's only so much you can do without your computer and filing cabinets.  Sis helped her out a lot, but again, there's only so far anyone else can go to do her job.

I made unsweetened 'sweet tea' the other day.  It's like regular iced tea, except for adding baking soda to the pitcher before you pour in the hot water.  (The baking soda makes it smooooth.)  I sweeten each glass with my yellow packet stuff.  I know, there are southern women all over the land gasping at this perversion, but I gotta do what I gotta do.  I love sweet tea, but I don't need the sugar.

Yesterday, I got the paver project done under the deck.  I need to snap a picture, but I'm lazy.  Anyway, it looks quite nice - manmade paver-type bricks interspersed with natural flat rocks.  Now, I'm itching to go buy some big blocks to shore up the end and finish the under-the-deck.  And a few bags of dirt.  And more gravel.  And some pretty flowers... like the quiet dam, once this one bursts, look out.  ;o)

Okay, I'm tapped out now.  What's up with your 'this n thats' this week?