The Chaos Diaries... The Next Generation

I find it strange that a bunch of people standing around holding signs for the country to reopen is a severe danger to the public health, but a bunch of people looting and rioting is okee-dokee.  Holding a regular funeral is bad, but holding a nationwide funeral with thousands is peachy.  Social distancing is mandatory... except when you're marching in protest.

I read something about a speedway declaring they were having a protest, but really it was just a race, and 2000 people showed up to enjoy their favorite pastime.  I heard the same thing about a church service.  I guess as long as you call it a protest, the powers that be think you're immune.

Either we'll see a massive spike in Kung Flu cases or this whole thing will bear out that it wasn't that scary and contagious after all.  Fooled you.  Hah.  Or some such thing.

I went to the Wallyworld last week.  About half the shoppers were wearing masks, down from about 2/3rds.  The arrows mean little to more people now.  Social distancing?  P'shaw.  I saw a confused looking dude and did what I always do, asked him if he needed help.  I stopped my cart a distance from him to ask, and he walked right up to me to talk about his problem.  (Mice in his car and how to get rid of them without leaving little rotting corpses in there.  I suggested peppermint oil, btw.)

The county where my Wallyworld of choice is has seen a slight spike in cases, so I'll be avoiding it for a while again.  I hope the Dollar General has ice cream.  Thank goodness cat food is in stock again at Amazon.  I ordered a bunch.  Let's see if it gets here in a timely manner.  My last order, which they said was delayed, actually showed up on time.  Let's please all remember that it isn't always Amazon delaying these shipments.  Most of the time, they're shipping on time. The delay is usually somewhere in the shipping chain.  And the other part of it has to do with the supply chain.  If they can't get it, they can't ship it.

I heard a story from a friend that she was in a location of a national store chain that had recently reopened and there was a woman there freaking out that the dressing rooms weren't available yet.  First, the lady needed to chill the hell out.  Things are weird right now.  Life goes smoother if you roll with the small stuff.  Second, why were the dressing rooms still closed?  It's not like you're in there with a group of people - strangers or otherwise.  Maybe they were afraid the extra cleaning of those rooms would put an undue burden on their staff.  :shrug:

I also heard that the rioters were talking about bringing their 'message' to rural America.  Bring it.  We're out here for a reason, which is chiefly to be the hell away from you, and more of us are armed and trained to be armed.  I guarantee a roving band of masked rioters around here wouldn't be roving for long.

Don't get me started about the anti-police sentiment rising in America right now.  Seriously.  Don't.  And, in case you missed something, I'm pro-police.  Very much so.

And another thing... No.  Once I get started rolling on that, I won't be able to stop.  Which was the point of last week's parade of pictures.  Speaking of which, here's a shot I took years ago and then tweaked to make it look like a painting... 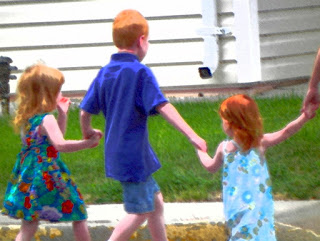 It gives me a happy.

How are things in your world?  Anything making you happy these days?