Today's bird of the day is a Common Loon.  I love loons.

Yesterday, Hubs and I were out.  We went up to the county seat to do some stuffs and to have lunch.  We did the stuffs, but then the restaurant we wanted to eat at was packed, so we drove over to another restaurant we liked once and they were closed.  So we drove around some more and then we headed for home.  Along the way, we stopped at a local woodstove/fireplace store.  We weren't buying, but we wanted to window shop.  The dude there laughed at the phrase and asked if anyone actually 'window shopped' anymore.  Apparently, yes, because there we were doing it.

The stuffs we had to do?  We went up to the title company to do the final stuff to make a little strip of property our very own.  Unfortunately, the wife couldn't show up - health issues and well, ultimate hermit lifestyle - so they gave him the paperwork to take to her and have her sign and get a notary.  Basically, the trip was pointless for us.  On the upside, dude took the papers, went all the way back home, met the notary there, wife signed the papers and the notary notarized them, then he took them all the way back, so we actually did close on that yesterday.  He stopped by the house afterwards so we could finish the last of it.  Long story short, this now belongs to us: 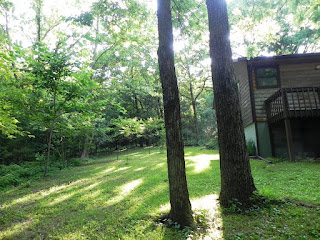 Yes, the garage was partially built over the property line and a several of my gardens were also not on our property.  And the south yard we mow.  And a third of our driveway...  Although our neighbor is awesome, it's nice to not have to think about that anymore.  We went from an oddly shaped rectangle 132x409x140x409 to a parallelogram that's 160ft front and back by 409ft on the sides.  Everything that belongs to us now belongs to us.  And those are our black walnut trees there.  Mine mine mine.  Bwa ha ha.  Our empire grew by a third of an acre.  Yay!  Today a little strip, tomorrow the world.  ROFL

By the time the day was through, I was not inclined to edit.  So I didn't.  =op

Not too far along the highway from here, we saw two eagles circling in the sky.  Beautiful, big baldies, with their white heads shining in the sun.  And I could hear them screaming to each other.  Too awesome.

We finished digging up the front bed.  And after we were done and had removed all the rocks, the bed is lower than before.  And it was too low before.  So we need dirt.  I went to Wallyworld to get some last minutes stuff before the holiday and thought I'd get dirt while I was there.  Dang, dirt has gotten expensive!  I ended up getting three cubic yards of  cow poo.  It's supposed to help the soil, and that soil needs it, lemme tell ya.  I expect that today, I'll be spreading poo on the garden.  Then I'll put the remaining dirt we already had on top and hope it gets close to the height I actually want for that garden.

Okay, that's it for me.  Now I'm going to chill out in my recliner, read some and watch a little TV.  How are the this n thats in your world?