I'm in some kind of mood this morning because I keep getting the urge to argue with morons on FB.  And it's about stupid stuff.  For instance, there was this math problem, and there was this guy arguing that the answer had to be 6 because when you broke the math problem down it was basically 2(2+1), but the first part of the problem had 6 divided by 2.  In what alternate universe do you ever get two goes into six two times???  I want to think he did that on purpose to see if anyone caught his mistake.  (No one arguing with him did, btw.)  It had to be that or else he's a total putz.  Maybe he's a total putz either way.

At first I thought the division sign in the problem was a plus sign and I couldn't figure out how anyone was coming up with nine - including the calculator the poster posted an image of.  Glasses, you dork, wear your glasses.  LOL

Hubs has been leaving a special little pile of seeds by the iris bed just for Chester Chipmunk.  I made Chester a theme song.  "Chester... Chester Chipmunk.  He's the chippiest chipmunk of them all."  It works better if you can hear me sing it. 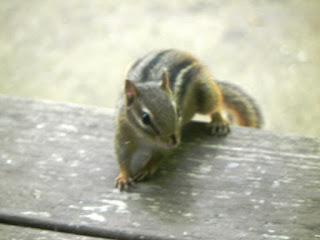 There's Chester on our front porch.  Isn't he darling?  I want to snuggle him up.  Of course, if I got my hands on him, he'd bite the hell out of me.  Wild things don't understand snuggling.

I wandered the yard yesterday taking pictures.  Here's one from my front door, looking across the porch at the yard. 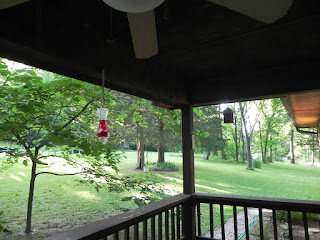 The yard is great until you have to mow it.  And that's just a fraction of the whole yard.  With trees you have to mow around scattered throughout.
Yes, we have a ceiling fan on the front porch.  Don't look at me.  I didn't put it there.  It was here when we bought the house.  Now, it's mainly a place for birds to perch while they're waiting for their chance on the suet cage.

We do so love the little birdies that we give them this to perch upon.  ;o)

Anyway, I'm running late today, so I'd better get my buns in gear.  Got anything to add from your this n that lists today?