Yesterday, I drove around to a few places and took pictures of the flooding carnage.  Of course, being who I am, I focused on the carnage to my fishing spots.  (I refuse to take pictures of other people's misery.  It's just too awful.)

And now for how it looked yesterday... Sorry, I couldn't quite get the same angle - as where I was standing before is now underwater.
The park where I go is off-limits.  They've put up the gate at the entrance and there's no way I'm walking the mile or two to get back in there.

The road is also closed to three of my other spots.  There is a back way in, but it's a craptastic dirt road now being used by the residents of all the neighborhoods up that way and I'm not interested in fighting those poor people for road space.  (Did it yesterday just to look-see, but I won't do it again.) 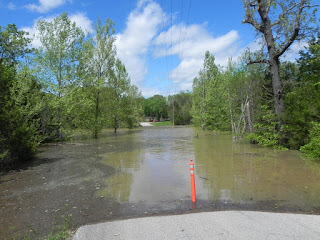 And another road is closed to an auxiliary spot I've used but never caught anything at. 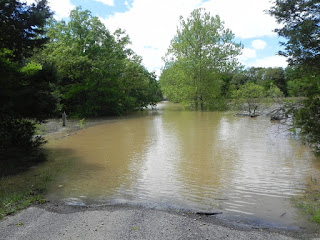 The road runs straight through there.  If you enlarge that, you might see where the road picks up again way in the background.

And then there's my spot on the main lake underneath the hwy bridge.  There is no underneath anymore. 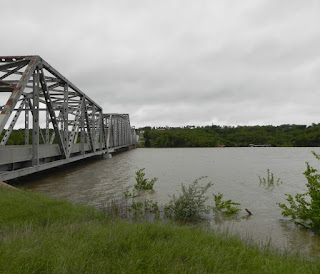 And the parking lot is flooded... 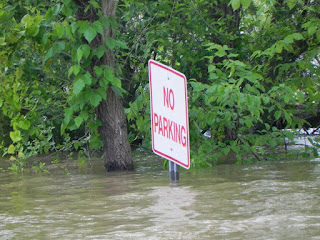 It says 'no parking' in the parking lot because they don't want people to park on that side.  Parking is in the non-lake side... except that's underwater now, too. 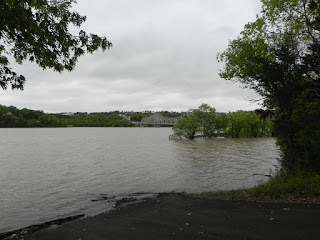 This morning, I'm going to walk around the neighborhood here - something I haven't had the heart to do yet.  It's not going to be pretty.  Worse than in December 2015, for sure.  =o\