Seriously, does anyone really care what week it is?  Oh, I'll probably still note the week number in subsequent Sunday Updates.  This morning, though?  Meh.

Now to get to what last week looked like...

The lake crested at 934.53' above sea level.  As of this morning, they've got it down to 931.28.  At this rate, it should be back to 'normal pool' in July.  If it doesn't rain any more.  Seems they've stalled the dumping of water from the dam because there's too much water in the Mississippi - which is where this water will eventually end up.  Perhaps once the Mississippi chills out, they'll dump faster.  Time will tell.

I didn't get any writing work done.  Still not sure what to do about the general malaise.

I've read a bunch, though.  A mystery, a SF, and a romance.  And I started another mystery last night.

Took loads of pictures.  Here's one: 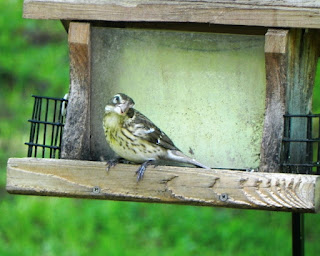 That's a female rose-breasted grosbeak.  I tried to get pics of one of the males, but he was camera shy.  We've also had northern orioles in the yard, but they're camera shy, too. 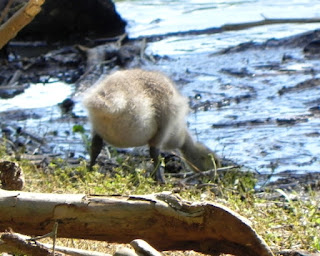 One of these days, I should compile all the bird butt pictures I've taken over the years.

Speaking of female rose-breasted grosbeaks, I had one ditch into the window this week.  I held her and stroked her little head until she stopped looking stunned.  Then she flew away.  I hate that birds knock themselves silly on our picture window, but I love being able to hold them.

Well, that's it for me.  What's going on your world?