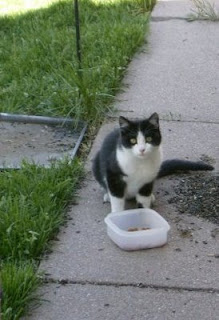 As I've said before, I feed the locals strays. (That's BB Kitty - top left - isn't he darling?) I know I shouldn't do it, because I knew I would get attached, but it was such a cold winter and they all looked so hungry, I couldn't help myself.

So I fed them.

I also know I shouldn't name them, for the same reason. I get attached.

But I did name them.

Sometime in late November, a tabby and white female (Mama Kitty - below right) started hanging around the house and she was very obviously pregnant. She started the whole feeding and naming thing. I mean, it's friggin' cold outside and food was scarce. I couldn't just let a pregnant mama starve to death. 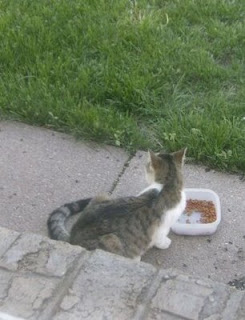 Anyway, I started putting food out for her. She had her litter in early December and BB Kitty was the only survivor. She was pregnant again last month, but I think she lost the whole bunch, because last I saw of her, she was skinny again and in heat.

Mama waits for me on the porch every morning, and while she won't let me within five feet, she doesn't run away from me any more. She's even been seen catching a snooze between feedings.

Then there's Max (I haven't gotten a pic of him yet). He's a big long-haired tabby - almost Maine Coon looking. Poor thing was somebody's baby once, considering how much he wants me to pet him and love him. Of all the strays, he's the only one who's not feral. He's had a broken jaw for as long as I've known him, but he does okay. He eats fine, although hard food has a tendency to make him drooly. 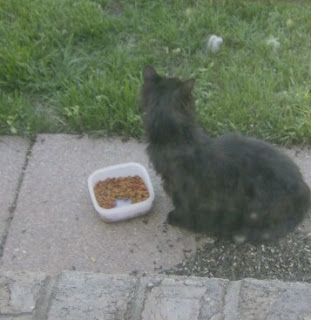 Finally, there's Jay (left). He looks like holy hell. His fur is scrubby and missing in places - but not like mange - more like he lost a fight with a shaver. He runs when he sees me, but he's happy to come back once the bowl is full again.

I know none of this is a rant, but wait for it. Monday when I got home from out of town, the road in front of my house was covered in blood. It still grosses me out to think about it. In the middle of the stain was a shape - a small animal shape. A kitty shape, if you will. (Could've been a small dog, but not a squirrel

I'm thankful the local police clean up things like that, but I'm lost as to which of my strays won't be coming for dinner ever again.

Last night, BB Kitty came to the restaurant, but he's the only one I've seen since Monday morning. (It's been pouring rain, so I didn't really expect them to come out, but the wait is killing me.)

And now, time for the rant. What the hell is wrong with people that they can't bother to keep track of their pets? Like in the case of Max, who was loved at some point or he wouldn't be so loveable. If you're not going to love something for the rest of its life, at least have the decency to take it to a shelter, for petesake. Don't just dump the poor thing by the side of the road. And for godsakes, have them fixed so they don't make more unwanted kitties or puppies or bunnies. (My own Kira was a rescue, after having been dumped outside a shelter at 3 weeks old - sans Mother.)

I used to work for animal control, so it's not like I'm a Pollyanna about what happens at shelters. But after seeing numerous animals squished on the roads or starving to death or so diseased it broke my heart, I learned that a gentle death is preferable to a horrific half-life. (Okay, maybe not for them, but seeing a cat dragging it's lower half behind it because it got hit by a car and no one bothered to help it... well, it puts things in perspective.) Hell, if I was suffering that badly, I'd want to be put out of my misery.

Anyway, the point here is that if you want a pet, make sure you actually want it - forever. And if for some reason, you can't take care of it anymore - or you don't really want it after all - seek out a shelter or rescue agency or SPCA chapter. Give them at least a shot at a new life, and barring that, a shot at a more noble death than splattered across the pavement.

I don't blame the driver who hit whichever stray it was (although if it was one of the assholes who fly down this residential street without paying attention, they deserve to be slapped). Most likely the kitty darted into traffic, and there was nothing anyone could do. (I've lost more squirrels that way.) I do blame the people who leave these poor things to fend for themselves in a world where diesel pickup trucks rule the roads.

Of course, this is part of the reason why Kira never leaves the house. (The other part is that she's terrified of outside, but that's another story.)
Posted by B.E. Sanderson at 8:59 AM