I was watching Worst Cooks in America last night and they were doing a wrap-up kind of thing where they had clips of the worst in categories.  I was totally amazed by the woman who didn't know how to use a knife.  She tried cutting with the protective sleeve on first.  Then she tried cutting with the dull side of the knife.  It was tragic.  How did that poor woman ever eat before she got on that show? Or was it all make believe for the viewers?

Yes, I am a bit cynical.

No. I won't talk about the election.  I have my reasons.  I did see someone get crazy-ass mad at a writer for posting something lighthearted on their Facebook wall.  Something like 'I don't want to talk about the election so tell me if you like grape jelly or strawberry jelly'.  (Not that, but something as innocuous.)  And this other person totally went OFF.  It was bizarre.  And a little scary.  And I didn't know the crazy person, but I totally blocked them.  Don't need anymore cray-cray.  Had enough when I was younger.

So, anyway, I went for a walk yesterday to get away from the post-election crazy.  It was awesome.  I didn't take the fishing poles, but I walked along the lake in a place I'd never walked before.  Kind of not the smartest plan I ever had because the rocky shore was totally unstable, and just about every step felt like I would start a slide that would tumble me into the water.  But it was AWESOME.  Here's where I was... 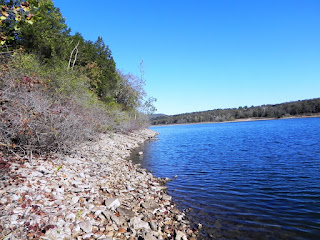 That's all usually underwater up to the vegetation line, but the lake level is so low this year.  I don't know if you can tell, but that's all big rocks.  I can't wait to fish there in the boat when the water level rises.  Basstravaganza!

This time change is killing me.  I've been up before 4 every morning since it changed.  Sleep later, my ass.  Damn Ben Franklin for thinking of this.  Damn whoever it was that implemented it during WWI.  Damn Congress for not getting rid of it a long time ago.

How's the this n that for you this week?  And, please, no election stuff.  I've had more than my fill.