Fifteen weeks in... the wind still refuses to blow... no sign of land... the crew has slipped into a coma...  and still we float...

It's Sunday morning again.  Been up since 4:30 after a total turd of a night's sleep.  But that's what I get for eating ice cream before bed.  Derp.

No writing and no editing this week.  Blerg.

My sale for the SCIU books ended Tuesday.  Sold two books outright and had someone read through the whole series in KU, one after the other.  Then I tried to set up advertising for Accidental Death but I thought last week was the week before, so next week is two weeks away.  Umm...  Yeah.  Anyway, AD will be on sale starting Tuesday and running through next Monday.  Poor planning on my part, but I'm running with it.

Next Sunday is Easter.  Umm, yeah.  Poor planning on my part.  Totally.

I read some stuff.  Not a lot of stuff, but I'm chugging right along.

I did some active things early last week and then nothing.  3 out of 7 days.  But one of those days I went fishing twice, so technically I was active 4 times.  That's my story and I'm sticking to it.

If you're friends with me on FB, you may have seen the Packrat Saga.  Friday I was getting ready to go to Wallyworld and Hubs lifted the hood to put washer fluid in (my windshield washer mechanism leaks, so he does this every time I go anywhere) and a packrat popped up at him from my engine block.  It had built a lovely nest on my manifold the night before.  We scared the shit out of it, cleaned all the crap off - including the leaves from my hollyhocks... the bitch - and off I went.  Saturday morning, I went out to see if we'd scared her away.  Nope.  I found this... 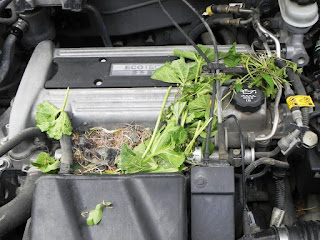 No sign of the rat.  (Eastern Wood Rat aka pack rat, btw.)  But we cleaned it all off again.  I wiped everything down with orange Clorox wipes and then we put mothballs all around the engine compartment.  This morning, we'll see if it worked to encourage her to go elsewhere.  If not, it'll be Day 3 of Sandersons vs Rat. Two days and three hollyhocks bitten almost entirely to the ground.  Day 3 may include her untimely demise.  (Okay, probably not.  She really is kind of cute for a destructive little bitch.)  I read somewhere that dryer sheets and Irish Spring might deter her.  So, that's next up.

It's been pouring rain since yesterday morning.

In case you missed it, I made cookies on Thursday and posted the recipe Friday.  Yesterday, I made ribs.  And I ate too much of those, so I'm kinda feeling fat this morning.  No, I haven't weighed myself lately.

Spent some time watching The Masters Tournament.  Don't care who wins as long as it's not certain people who have irritated the crap out of me.

Hubs mowed the lawn for the first time this year.  Go Hubs.  As soon as this rain dries out, he'll be spraying for ticks.  Yay!  And I weeded the last of the garden beds so he can get the spray right in there for better tick slaughtering.

Not sure what this week will bring.  I'm closing my eyes and hanging on for dear life.  How about you?

UPDATE: Packrat 3, Sandersons 0.  The dryer sheets and Irish Spring thing sounded good in theory, but it was silly in practice.  I went to an old bottle of natural bug spray with citronella, lemon, and peppermint oil.  Doused the engine compartment.  Take that, you furry little bitch.
Posted by B.E. Sanderson at 5:27 AM