Self-Sufficiency and, Oh Yeah, a Sale

Before I get started with the real post, here's the opening salvo for the Accidental Death sale.  Someone in the UK bought a copy before I even got started, so that's a good thing.
" 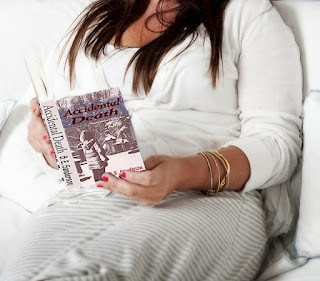 Nothing exciting ever happens in Serenity, CO. Especially not murder...
Starting today, Accidental Death is on sale for only 99c/99p. (Always free on Kindle Unlimited.)
US: https://www.amazon.com/dp/B00XM6VJ9U
UK: https://www.amazon.co.uk/Accidental-Death-Dennis-Haggarty-Mystery-ebook/dp/B00XM6VJ9U"
Now, on to the actual post of the day...
I'm a big fan of self-reliance.  Whenever possible, I put my little thinking cap on and figure out how to do things with a minimum of fuss and expenditure.

Take that picture up there.  Did it myself.  Oh, if you blow it up and really look, it's not perfect, but it works.  Made the cover of the book, too.  I like it.

This weekend, I used some old insect repellent to drive away a rat.  Then I went out and got the stuff  in the insect repellent and made my own rat repellent.  Fingers crossed it works.  I haven't checked yet this morning.  That was not exactly cheap, but probably cheaper than paying someone to come out and trap the little bugger.

The way our house is laid out, the morning sun comes through the sun porch window, through our office window, and smacks Hubs right in the face.  I thought and thought about that one, and tried some things that were lame and didn't work.  Then I got the idea to use a piece of black felt cloth I'd picked up years ago for another project, hang in from the plastic shelving unit and slide the unit in front of the sun room window.  Tada.  When the sun goes past a certain point, slide the shelving back.  Easy peasy.

Years ago, I sliced my finger open.  Probably could've used stitches, but it was Easter Sunday and who wants to face an ER bill?  Cleaned it up, put some bandaging on it, and then used to two popsicle sticks to keep my finger in place so the wound wouldn't keep popping open.  Barely have a scar now.

Hubs is the same way.  The bracket holding my muffler on rusted through and snapped, leaving my muffler hanging there with no support other than the pipe itself.  He took some wire and gerryrigged a fix.  That's held up for about three years now.  Then, when the grill had a rust problem, he found a way to fix that, too, using a couple metal brackets.  Good as new... well, almost.  It works, and that's the important thing.  Hell, after we moved here, Hubs taught himself everything about how to re-plumb a house and then did it.  Why pay a plumber, right?

Sometimes, it would be easier to just pay someone else to do stuff.  Sometimes, it's necessary.  Like with anything electrical.  Neither of us wants to have anything to do with that, so we call our electrician.  He's reasonable and he's got loads of experience not electrocuting himself.  I also am willing to pay people to do covers I don't think I can pull of by myself.  And, of course, I pay an editor because I can't see everything that needs to be fixed in my own work.

But, still, I do whatever I can whenever I can do it.

How about you?  Are you likely to do things yourself or find someone else to do it?