In case you're not on FB or MeWe, here's a picture of Penelope O'Possum... 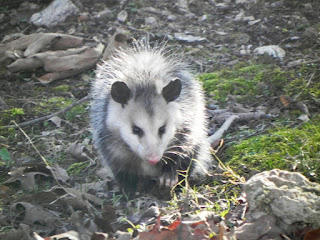 ...when she stopped by the yard a couple afternoons ago.  Mom's reaction "she's so clean".  All in all, I don't think opossums are dirty.  Sometimes they just look that way because they don't have access to laundry detergent to make their whites bright.

I'm up to 13% on my edits as of last night.  Slow progress is still progress.

And I vacuumed yesterday.  And I walked.  Pulling myself out of the mire by my bootstraps.  (Okay, so maybe Hubs had to poke me in the metaphorical ass to get me to take a walk... but I did it.)

I'm in the middle of an Alistair MacLean novel right now.  I was reading along, wondering what in the hell he was thinking about when he wrote the MC as a criminal who shoots a cop and runs from the law.  Umm, long about the middle, you learn it's all a set up so the MC can infiltrate the bad guys.  Yay.  I was worried maybe ol' Alistair had gone off the rails, but nope.

Yesterday, I forgot to defrost anything for dinner, so long about 5, I was trying to figure out what the hell to do.  I made a meatloaf the other day, but we'd both had leftover meatloaf for lunch.  Then it hit me - grilled cheese sandwiches.  Then another thing hit me - put slices of leftover meatloaf in the grilled cheese sandwiches.  Thank goodness for my Foreman Grill.  I just assembled the suckers, slid them onto the grill and closed the lid.  Two-three minutes later, they were done.  And they were awesome.  Mine had Swiss and American cheeses, Hubs' was Cheddar and American.  Yummers.  Not sure why I never thought of doing that before.

BTW, there's nothing quite so yummy as leftover meatloaf.  Am I right or am I right?

And that's enough of that.  What's up in your this-n-that this week?