Anyway, here are this year's one set of twins with their mama. 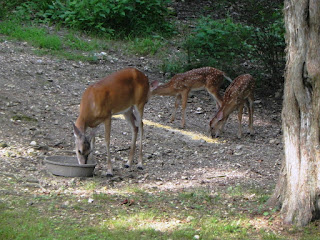 The fawn on the left is Dart and the one of the right is Jumble. 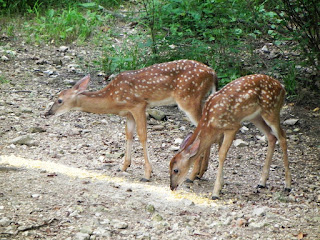 I think Dart is a male and I named him Dart because he looks like he has a straight line of spots headed for a circle of dots on his shoulder - like a dartboard.  Jumble might be a female and is Jumble because her spots are kind of all jumbled up in one area.  (Hey, it's tough thinking of fawn names every year.)

Update 7a.m.:  The third fawn just walked into the yard and up to Dart and Jumble, who were eating.  He then proceeded to get up on his hinds legs and kick the crap out of the twins, chasing them both back into the woods.  Definitely a buck fawn.  He's now christened Little Joe after the boxer, Smokin' Joe Frazier.   No pics of him yet.  The light this morning isn't good for pics.

Update 7:45a.m.:  We just had a set of twins in the yard and we're 90% sure they weren't Dart and Jumble.  For now, they will be Freckles and Fawn to be Named Later.