I don't know if I've mentioned this before, but I love love LOVE my Foreman Grill.  I can whip together grilled sandwiches of all varieties in no time.  No need to flip them either, so I can cram all sorts of stuff in the sandwich - steak bits, sliced leftover brats, chicken strips, fried eggs.  Yummers.  I can also put a hamburger out in like 3 minutes.  Chicken tenderloin or thighs, too (boneless - bone in takes forever).  You just can't put hotdogs on it because they want to roll off.  My only gripe is mine's a pain to clean.  Less work than cooking things in a pan, though, so it's all good.

I also love my battery backup.  We had a major voltage drag yesterday and the backup software told me so.  It's also kept my computer from freaking out during brownouts and surges.  Plus, I don't lose precious words if I'm writing and the power goes out.  It gives me time to save and shut everything down safely.  If you don't have one, squeeze the money out of your budget and get one.  It's worth it.

Last year, the local grocery store changed hands and the guy who was in charge of fishing gear there (yes, we have fishing gear at the grocery store) was let go.  From what I heard, he marched right over to the actual bait and tackle store and demanded a job.  The owner there told him he was welcome to fill out an application, but they don't hire people just because they demand a job.  He was rude to them and left.  Months later, he opened his own tackle shop four doors down in the same plaza.  It had a horribly long and unwieldy name.  And it didn't do much business - because why go to him when you can go to the actual bait and tackle shop with the super-nice owner and employees?  Anyhoo, today's paper has an article about the NEW owner of the newest tackle shop.  I'm kinda happy the other guy is gone.  I don't expect this store to do any better, though.  The name has changed to something shorter, of course, but it's worse.  And this other dude doesn't even have experience selling bait and tackle.  Ah, drama in the back of beyond.

PSA:  Despite what you may have heard and seen on TV, adopting an adult guard dog or guard dog mix should not be entered into lightly.  You have no idea what kinds of things it may have been trained to do, the types of experiences it's had, etc.  It may be perfectly lovely until a certain set of circumstances come into play.  If the dog's been trained to guard a yard, for instance, and someone walks unknowingly into that yard, they will get attacked.  If they've been trained to guard while chained to the house, and someone approaches them while they're on their chain, they will get bit.  (Been there, done that.  Got the scar to prove it.)   As with all pets, do your research before you bring it home - both on the breed and on the individual dog*.  For the record, one of the nicest dogs I ever met was a pitbull. Her name was Petey.  She'd been bought from a reputable breeder and raised up from pup to adult by a very conscientious owner.

Okay, that's about enough out of me this morning.  What've you got on your this n that?


*Don't take the adopting agency's word for it on breeds.  They said my Rott-n-Lab was a Bouvier mix. 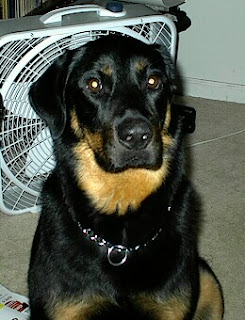 Do you see anything remotely 'Bouvier' in that dog?  Sheesh.

And they said this was a Chow mix: 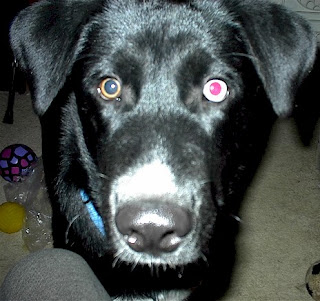 I figured Malamute and Lab, btw.  110lbs of him at a year old.  Maybe they thought he was Chow because his brother was extremely fluffy.  :shrug:

The point is, people make mistakes.  Don't let their mistake be your heartache.  Do your homework.

Labels: opinion, this n that