I posted on FB about 10-12 days ago that I was officially sick of hearing about the eclipse.  I mean, come on.  They started hyping it up over a month ago.  It's not like Haley's comet, either.  There'll be another one in 2024.  (Which they are already hyping.  Ugh.)

I remember, back in 1979, doing the whole pinhole thing for school.  At that work making the damn thing and I didn't see anything.  Or at least I thought I didn't.  I think I was expecting something more than the changing of a circle of light on the back of a box.  Perhaps my 8-9 year old self had hoped of the projector being more like a projector and showing me a movie or something on the inside of a box.  :shrug:  I found it all so very anticlimactic.

So when they started talking about the 2017 eclipse, I was all like 'meh'.


I didn't actually 'see' the eclipse yesterday.  I wasn't planning on doing anything, but Hubs thought it would be cool to make a pinhole projector, so we did and we went outside to try to out and junk.  Once again, it was :yawn:  I mean, it was fun doing that with Hubs, but the actual spectacle was boring.  Then a little while later, when the sky started to get this weird semi-dusk look to it, we went back outside to try the pinhole thing again.

And something kind of cool happened.  The concrete slab out in front of the porch was covered in these little fingernail moons.  I took some pics of them.  It was way better than the entire pinhole thing - then and now. 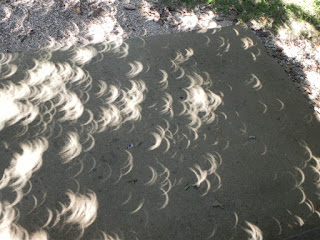 I guess those people who were in the 'path of totality' and had those glasses got to see something really neat.  I guess I'd have to see it to get excited about it.  Maybe in 7 years I'll foot the bill for those glasses things.  I'm still not driving hundreds of miles to get into the path of it, though.

Personally, I get more excited about rainbows.  You never know where one is going to be and then bam, there it is.  So pretty.

Anyway, did you see the eclipse?  Was it everything you hoped it would be?
Posted by B.E. Sanderson at 5:55 AM