I think last week was Week 38.  It's hard to tell.  This whole ISO-8601 standard week thing is messing with my head.  Week's start on SUNDAY.  They've started on Sunday for a long freaking time.  All the calendars I own start on Sunday.  Why someone felt the need to change that fact to 'let's start the week on Monday now' thing escapes me.

I was up to 6800 words on Djinn 4.  Then I realized I had totally farqued up, set all but about 500 of that aside, and took another run at it.  I'm around 3K in now.  The good news is I can still probably use a lot of those other 6300 words.  I just had them in the wrong place.  I think this was mainly because I wanted to answer all the questions from Up Wish Creek right up front to save my readers from wondering.  I need to cut that out.  Things will happen.  Questions I created in Up Wish Creek will be answered... eventually.

And I came up with a title.  When the Wish Hits the Fan.  I know I said something before about changing to a djinn-based title system (along the lines of Djinn and Tonic), but it wouldn't work for this since this is still a continuation of what happens in the wish-based title system.  If that makes any sense.

I went fishing once last week.  Caught two bluegills and threw them back.  They weren't that big.  Better luck next time.  This coming week is supposed to be cooler, so maybe the fishies will be hungrier.

I was looking out the windows on the sun porch a couple days ago and saw this: 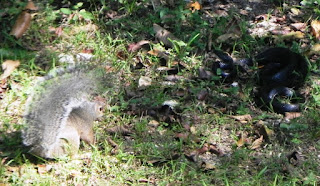 From up here I couldn't tell if that black ropey thing was a cottonmouth, so I sent Hubs out with a shovel to see.  It wasn't a cottonmouth.  It's a Western Rat Snake.  About 5ft long when it finally stretched itself out. 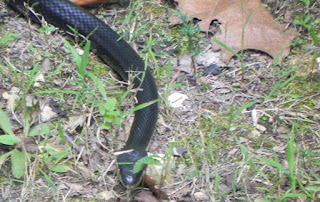 He went on his merry way into the forest, which is always good.  We don't mind the rat snakes, but we do not want them wintering under the house. 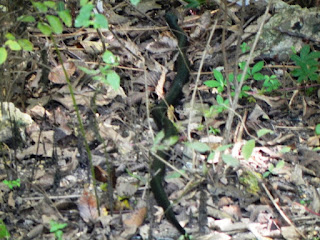 To that end, Hubs shored up the door to the space under the house yesterday.  While he was doing that, I stuffed steel wool in all the crevices behind the kitchen cabinet drawers - not against snakes, against mice.  We should be vermin free for winter now.  :fingers crossed:  I'll wait a week to make sure and then I'll put stuff back into those drawers again.  Nothing grosser than finding mouse droppings in the same drawer you keep eating utensils.  Lemme tell ya.

The drawers, btw, have been thoroughly doused with Lysol.

On the reading front, I'm still working on that fantasy novel.  It's really good, but sometimes when my writing is giving me fits, I'm not that keen on reading.

I'm sure there are probably other things, but my caffeine and nicotine levels are still too low to think efficiently.  What's up in your worlds?