Writing: An Analogy in Pictures 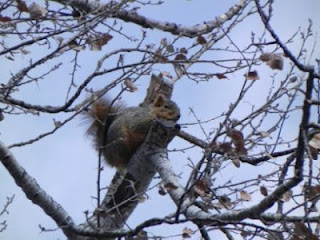 Earlier today I stepped outside for a smoke and saw a hawk drifting lazily through the sky above.  I ran in the house for my camera, because you never can tell when you're going to get a chance to catch a hawk on the wing.  I managed to snap two before his flight took him behind the trees.  They weren't even very good.  C'est la vie.  As I was turning to go, though, I thought I saw a glimpse of orange in the tree limbs below where the hawk had been drifting.  Sure enough, a squirrel was crouched at the end of a cut branch.  I walked around a little bit to get a shot where the twigs weren't in front of his face, but for the most part, the shot, the lighting, the composition - that was luck. 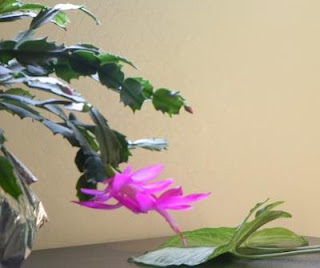 I've been waiting years for this Christmas cactus to bloom.  Every time it gets a bud, something happens and the bud falls off before it blooms.  Recently, I noticed a single bud forming at the top of my plant and I've been babying this thing ever since.  Now it's covered with buds and one by one they're blooming.  The shots I took of that first bud were more like the candid snaps I used to take with my old 110 camera as a child - pretty, but not amazing.  This time, I waited until the light was just right.  I crawled on the floor trying to get just the right angle.  I moved things out of the way to get just the right look.

I think both pics are amazing.  One was total happenstance.  The other was carefully planned and took weeks of coaxing to get this ornery cactus to make with the blooming already.  Both are professional quality, imnsho, and I'd be happy to offer them for sale.  (Okay, maybe I could still tweak a bit, but like writing, I'm never 100% happy with my pics.)

What's the point?  It doesn't matter whether your work turns out awesome by hard work or by happenstance. Sometimes getting the words on paper is easy and it all comes together without a whole lot of effort on our parts.  Other times, it takes everything we have just to get that one turn of phrase we can be proud of.  In the end, how we get to the awesome doesn't matter - the only thing that matters is that we reach the awesome eventually.

And by the way, to get those two awesome shots above, I took a whole lot of pics that weren't so awesome.  Some were close.  Hell, a few are nearly as great as those two.  But those were the two I chose as the best and offered up for public consumption.  Sound familiar??  ;o)
Posted by B.E. Sanderson at 9:40 PM