Just when you thought it was safe to step away from the computer... 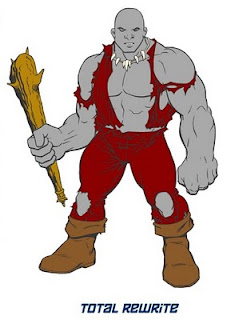 He's ready for a major manuscript smackdown.  He'll rip those unnecessary scenes apart.  He'll beat those secondary characters into shape.   And that necklace he's wearing?  It's made of the teeth he knocked out of any MC who dared to disagree with his suggestions.  He's mean, he's bald, he's as ripped as his clothes.  He's...

I'm looking forward to going head to head with him soon.  Maybe as soon as tomorrow... if I don't wet myself beforehand. ;o)