Lookie what we found...

Lookie what my daughter just found in our basement.   It's a Daring Jumping Spider.  Of course, this pic isn't mine because I don't have a camera that'll take one of something so small.  (If spiders don't gross you out, scroll down... I have to move it below the screen or daughter will freak every time she sees my homepage.)


And she didn't even scream.  Yay her.  Not that she'd touch the jar with him in it, but still... it's progress.

Anyway, I went looking for what this little fellow was because he was so damn pretty.  Ours was slightly different - with yellowish markings on his back instead of white - but the defining characteristic is the nifty metallic green fangs.  I'm not a huge bug fan, but he was too cool to squash.  He entered the Sanderson spider relocation program and is now residing in a vacant building nearby. 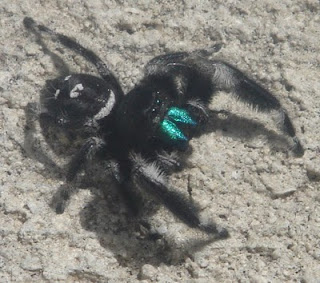 Have a nice life little man.

You know, he's so awesome, I almost think he deserves a spot in one of my stories.