Welcome back to the fishing report for less than competent anglers.  Here's the updates from last week...

Saturday - After spending Friday on the boat, I wanted to try some things from the bank in that same locale.  I spent from about 9am to around noon standing in the cold fog at various points and not getting any bites.  Supposedly the fish are coming in shallower, but I'm still not seeing it.  They seem to be off worms almost entirely.  And they aren't interested in any of my lures at the moment.  It's probably me because I did see one dude in a boat catching fish at one of my other spots.  Which is frustrating as hell, but that's fishing.

Tuesday - I decided to do some afternoon fishing.  There was a good mix of clouds/sun and the air temp was in the low 60s, which was great for me but I was doubtful how it would be for the fish.  I went to a main tributary where a feeder creek comes in.  Tried my crankbait lure that looks like a shad for a little while off the ledges.  Nothing. Threw a worm in at the same spot.  Zilch.  Moved north about 100 feet to where the incoming creek makes a point with the river.  Kept the worm on and threw out "as far as I can throw and as deep as I can go".  I was getting some interesting bites once the breeze and the current brought my bobber in about 15-20' off shore, but not sealing the deal.  Then something took the bobber straight down.  I set the hook and started reeling.  I thought I had a bass on and I kept waiting for it to jump, but it didn't.  Then I was like 'did I catch a freakin' stick?', but it was fighting a little, so I kept reeling.  The drag was whining at that point, so I kept tension and reeled slower.  When I could finally see it, I thought 'is that a sucker? what the hell am I going to do with a sucker?'  When it got within a foot or two of shore, I changed that to 'oh, holy shit, it's a walleye.'  No net.  On a pre-rigged hook with regular fishing line.  I got it right up against the rock I was fishing off, reached down, and got a firm hold of the line above the hook to pick that dude up out of the water.  Then I was kinda freaking out a little.  I got it laid out on a flat rock and measured so I was sure it was longer than the 18" minimum length for this lake.  I don't remember getting the hook out, but I do remember getting that bad devil on the stringer.  Those teeth are a little scary. 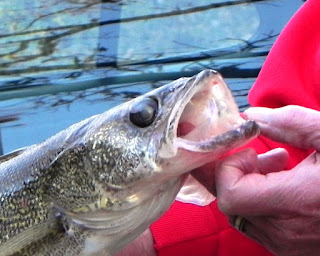 Anyway, once I settled down a little, I measured it again.  22 inches.  Weighed it at home.  4 pounds.  (I need to buy a more exact scale.)  In the same spot, I also caught a 14" largemouth.  Perhaps my fishing drought is over.  :fingers crossed: 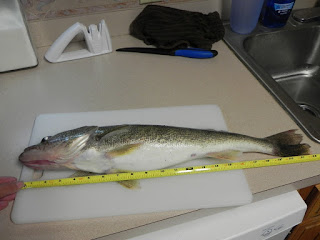 One last thing.  I was talking with a guy out there.  He'd just come in on his 17" Bassmaster boat.  He says the crappie are biting good on shad in the coves and he showed me the six 10.5 - 11.5" ones he'd caught that day.  Next time we're out in the boat we'll have to try the coves.


Thursday - Midday fishing in the same spot where I caught the walleye.  Hubs came with this time.  We started out about noon and fished until 4pm using worms only.  It was about 53F out with no clouds and no wind, which is probably why I didn't have the same results.  We did catch a couple largemouth bass - Hubs was 13" and mine was around 10".  If there hadn't been a length limit I would've definitely taken that 10" home.  What a fat hog.  Stumpy.  Short with heft.  It was just nice to be out and to catch a couple bass.

That's all for me.  See ya next week.  Until then, have a great week and go drown some worms.
Posted by B.E. Sanderson at 1:00 AM