Sorry I'm late getting this up this morning, but it was one of those weeks.

First off, we got a boatload of rain this past week and the week before, so the lake level has risen dramatically.  At the beginning of April it was around 906', this morning it's at 919.91'.  Almost 14' in a month.  This means all of the fishing spots I have depended on since this time last year are underwater.  The Kings River is a floating log jam on top of chocolate milkshake water.  The lake itself is high and wide.  It's a mess.  Now, having said that, here's how fishing went this week...

Monday - Went to the park.  The ledges I usually stand on are underwater, so I ended up back a few ledges.  I could still get around them pretty good though.  The water was super clear and I saw at least two humongous carp swimming right off the shore.  HUGE.  They weren't interested.  I also saw a good sized bass.  It also was not interested. Caught one 6" bluegill.  Since only bluegill were biting, I went to my go to spot.  Too much mud and crap. Nothing was biting.

Thursday - Out in the morning.  This trip had two purposes - to fish and to survey storm damage.  On the way to the park, I could see trees down, poles down, cow feeders overturned.  The park?  Other than the usual post-storm leaves and junk, it was fine.  A little more water up the ledges. Caught one 12" spotted bass and one small bluegill.  Went to my go-to spot.  OMG what a mess.  Trees blown over, the water filled with trees and logs and limbs and junk.  I thought there was mud and crap on Monday?  I didn't know what mud and crap was.  A blown-over pine tree is blocking the path to my ledges there, so I fished right off the parking area.  Right off.  Like I could've sat on my car and cast out.  Things were biting, but I didn't seal the deal.  Had something big on and almost got it to shore, but I couldn't see it in the muddy water.

Friday - The rain settled down by afternoon, so I went out about 2:45p.  I went to the park.  Back to the ledges.  Water's about 6 inches from coming over the next level of ledges and backing me up even further.  The water was a little murkier, but still not bad.  But for the first two hours, I wasn't getting any bites.  And I tried all sorts of stuff - deep, shallow, far, close - with the worms.  I tried several fake baits.  Had a big largemouth chase my Senko green and white worm to within a couple feet of the shoreline, but he changed his mind and I couldn't get him on the next cast.  The next cast, my rig hung up on the rocks and I lost the whole deal.  I went back to worms and back to just chilling out.  At one point, I was sitting farther back, just watching my bobber float toward me.  It had drifted to within a foot of the shore (well, the edge of the water - where it was at least 5' deep - and WHAM.  I landed a 9.5" redear sunfish.  (Weighed him at home - 9oz.) 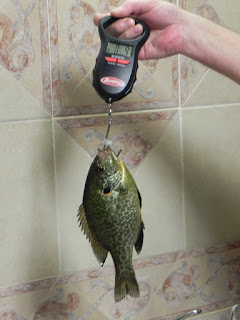 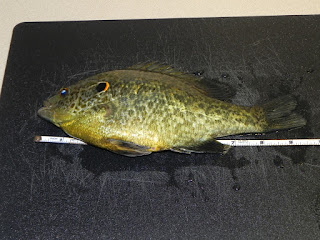 (Check out his pretty red ear there.) I cast out and tried to get more of those - because they're damn good eating - but nope.  He was by himself or his friends got scared off.  So I went farther out again, and let it drift toward me again.  About ten feet out, it got hammered.  I landed a 14.5" spotted bass.  I think it was a girl and that she was empty of eggs.  Dare I hope for post-spawn?  After I landed her, my nearly new reel decided to take a shit and while I did have a back-up rod/reel, I didn't catch anything else.

That's about it.  We're supposed to get hammered with loads of rain this weekend.  Who knows where I'll be fishing next or how bad it will be out there on the lake.  Fingers crossed.