We saw our first fawns of the year.  Twins.  I'm calling them Dot and Dash - because she's very spotted and he has a line on his neck: 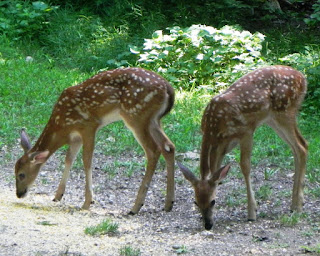 And, no, I am not certain of either one's gender.  I'm just assigning the left one as a girl and the right one as a boy.

The pump went wonky on our sprayer again.  We just got this new pump in May and it's already pooping out.  So I call the company where we bought it.  The customer service gal was really nice, but ineffective.  I tried to tell her we didn't need to trouble shoot because we knew what was wrong.  Eventually she told me I had to call the manufacturer directly, but that if I had any problems with them to call back.  I called the manufacturer and got put on forever hold where the recording kept telling me if I wanted to let them wait, press one and they'd call me back or press any other number to continue waiting.  I continued waiting until they got sick of me and dumped me into voice mail anyway.  I called back.  Got dumped into the queue again, but I'd lost my place in line.  Screw that.  I called the distributor back, got a new gal, and had her sending me a new pump in under ten minutes.

The political miasma in this country is really bumming me right the hell out.

I'm making zucchini bread this morning.  As soon as I can muster the will to move.  Need more coffee.  Tanker truck more.

I've been having the weirdest dreams lately.  I think it's because I'm writing again.  There seems to be a correlation between the frequency and weirdness of my dreams and whether or not I'm plugging down new words.  :shrug:

What's on your this-n-that radar today?