This n That Thursday - Randomosity

I got three numbers in the Missouri Show Me Cash drawing last night.  $10.  Woohoo!  Par-tay!

We have a rabbit here whose left ear doesn't stand up.  I call it 'Radar'.  Mostly because when I was growing up, a neighbor had a German Shepherd with one ear that didn't stand up and they called him Radar.  Yes, I have an unoriginal critter naming system.

I didn't like a certain celebrity before their big announcement and I'm not inclined to like them now because they announced this thing. (How's that for vague?)  I think I'd be a huge hypocrite if I pretended to.  Can't stand hypocrites.

A Carolina wren is making a home in the window casing in my bathroom.  There are twigs and moss all over the place in there.  He's a very loud little bird.  (And yeah, it's a he, because if I read right, males are the only ones who sing in this species.)  He was my alarm clock yesterday morning at 5:30am.

One scoop of cheap-ass vanilla ice cream in the bowl with one scoop of some special, more-expensive ice cream makes the joy last longer and saves money.

Sunday I mentioned Teeny-Tiny Tina, the miniscule deer.  Well, here she is: 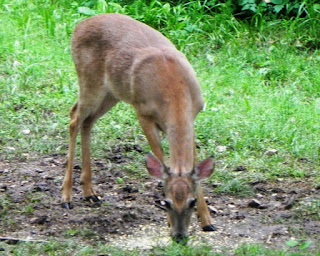 Of course, you have no reference point nearby to judge her size.  Trust me, she's about 2/3rds the size of an average yearling.

What random things do you have for me this morning?

Labels: randomosity, this n that