Cleaning and Sorting and Stuff 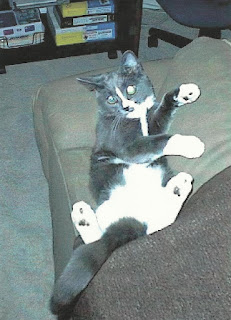 I caught a bug this week to get some things sorted and cleaned.  First, I decided to tackle the back closet - where I keep the Christmas decorations and those boxes marked 'Office Stuff'.  I weeded down the decorations while I was un-decorating.  But the thing I was most frightened of was the loooong box.

'Office Stuff' is pretty vague, but I knew what was in there.  Plastic grocery bags--loads of them--each packed with 'important papers' from years gone by.  It took me all yesterday afternoon to get through the bags marked '2007' through '2010', and one lost one from 2004 that wasn't marked.  Anything I didn't think I'd ever need again got shredded - if it had personal info on it - or tossed.

Today I spent the morning going through the rest.  Which basically amounted to 2001-2006.  I took 3 tall kitchen garbage bags and one big black back worth of shred out to the dumpster, plus two non-shred bags.

Anyway, I did find some interesting things while I was sorting:

- one of Kira's baby pictures.  I lost the rest in the great harddrive crash of '06.  I scanned it in and posted it for you.  Wasn't she a cutie?

- a sympathy card my uncle sent after my dad passed away.

- the bag of stuff my mom saved from when I was a kid - which she gave to me when I had a home of my own.  Oh, the memories.  Old report cards.  Homework assignments.  School pics.  I'll post some of that another time.

What would you find if you cleaned out those boxes you have waiting for you in the back of some closet?  Or are you more organized - a place for everything and everything in its place?
Posted by B.E. Sanderson at 7:36 PM