Another Anniversary of Contemplation 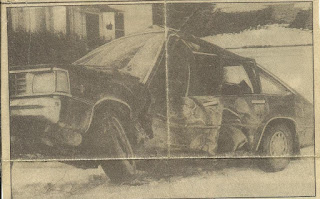 (Okay, so I did most of that and the jaws of life did the rest.)

I don't have a picture of what the accident did to my body.  Suffice it to say, I fared only slightly better than my little Citation.  At least I survived.  :moment of silence for my first car - which I killed:

This morning the whole mess came tumbling back at me as I sat on the couch contemplating my aching back (which went out Wednesday night) and as the memories of being an invalid all those years ago was brought into striking focus.

Years ago, I used to wear the keys to this car around my neck.  Certain people told me I was morbid to wear them.  After all that happened to me, how could I possibly want a memento of it with me daily?  :shrug:  I didn't look at it like that.  For one thing, that little car saved me.  If I'd been in something made of fiberglass - instead of steel - I'd be dead.  For another thing, those keys weren't there to remind me of what I'd lost.  They were a reminder of what I survived.

Shit happens, people.  Sometimes very bad shit happens.  And we all have several ways we can look at each tragic event.  We can use it as an excuse to fold up shop and lay around whining about our misfortunes.  Or we can use it to become stronger.

I am not the woman who ran a redlight on January 11th, 1994.  Maybe she did die that day after all, because the person who was pulled from that wreckage is not the same person who got into her Citation that morning.  Sure, every day since, I've had to face certain challenges I wouldn't have had to face.  Some days I wish I could take away all the injuries I still deal with even after 19 years.  But I would never take away the strength I earned.

What's something that's happened in your life that's made you a stronger person?

(The above picture was scanned from a newspaper clipping.  I don't remember which newspaper but the clipping says the photo is by Ben Balog.  Thanks for getting that shot, Mr. Balog - wherever you are.  And thanks to my parents for saving the clipping.  I never got to see my car again - it was sold for scrap and crushed before I got out of the hospital.)
Posted by B.E. Sanderson at 8:32 AM