The PROBLEM and the FIX 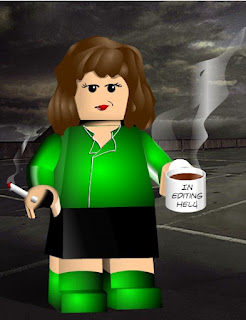 As you may have already seen on Facebook, last night I had a blinding flash of insight that derailed my perfectly lovely editing session.  There I was fixing little things, trying to make Djinnocide tighter and shinier, when all of a sudden the PROBLEM jumped out, scared the crap out of me and wouldn't go away.

At first I was perfectly willing to believe I'd never seen the PROBLEM before.  After all, it scared me.  Maybe if I didn't acknowledge it's existence, I wouldn't have to admit I've been avoiding it all along.

There we both sat, staring at each other like we were in some damn Mexican standoff.  I certainly couldn't ignore it anymore.  I'm not quite sure how I managed to ignore it all these months - it's so damn big.

So I did what any self-respecting coward would do.  I went to bed.  I expected to be up half the night worrying about the PROBLEM.  Except I wasn't and here's the thing.  When the PROBLEM jumped out, the FIX stepped out right behind him.  I think she's been there all along, too, I just never even glimpsed her tiny frame with that behemoth hovering over her.  In fact, I think she might be what's making him look so freaking huge.

Because she's the real scary part.  The FIX, which seems so small when you look at her head on, is going to be the real bitch.  She's small but she's everywhere.  If I can kick her ass, though, the PROBLEM falls apart.

Today, I will be kicking some butt and taking some names and adjusting what looks like four or five chapters.  Good thing it's rainy and gross.  Bad thing is that I have to do laundry while battling evil.