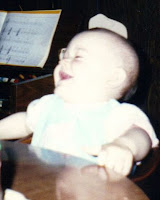 We've all heard a million jokes by now - heard them, read them on the web, passed them around email.  The question I want to pose today is how well do you know the jokes you've heard.  Below are the punchlines to several of my go-to jokes.  See if you know the jokes they go to.  I'll try to keep them clean so if you do know the joke, you can feel free to leave it in the comments, or if you don't, I can always post the jokes later.

2. A watchdog for the second floor.

7. Because the can said concentrate.

Yes, I have a weird sense of humor.  No, not all of the jokes are politically correct, but hopefully they're also not offensive - unless you are of the offendsensitive persuasion, and then, Sorry.  When I type the answers up, I'll try to scrub them clean of anything anyone can take offense to.  (And who knows, that may make the joke even funnier.)

Or if you're feeling funny, feel free to type up what you think would be the joke to fit with any particular punchline.  Whoever's is the most hilarious might just get a prize - I mean besides the prize of being covered in awesomesauce.

PS. #1 is really much funnier when it's told out loud.  It was also my father's favorite joke.
Posted by B.E. Sanderson at 2:06 PM