For Me? You Shouldn't Have. 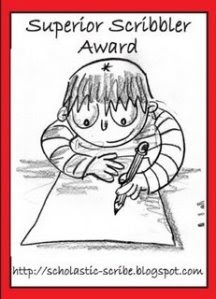 I got an award yesterday! The first one this new location has received! Woohoo! Anyway, a recent addition to The Writing Spectacle's posse - Jennifer Major - has bestowed The Superior Scribbler Award upon me. Yay!

According to the rules, I have to post... well, the rules, but I'm going to be a party-pooper. (My sisters made up a song thirty years ago about how big a party-pooper I am, so it's not a new development.) Besides, all the rules are over at Jennifer's post, if you're interested.

I'm also supposed to award five other people with this. There are ten people following me - nine if I don't include myself - so I'm just going to say that all of those fine ladies are Superior Scribblers, and leave it at that. In fact, anyone who stops by here and takes the time to read my thoughts on a regular basis is awesome. Give yourself an award, or a pat on the back, or a hot fudge brownie sundae.

Thanks for the award, Jennifer. I only just met you, but I already think you're awesome.
Posted by B.E. Sanderson at 8:36 AM