Not a whole lot going on in my world this past week, but I'll see what I can come up with.

I finished the edit round of Bloodflow and then went back to read for content and clarity.  This, of course, turned into another editing round.  I'm at 30% with today and tomorrow left before the end of August.  I might miss my self-appointed deadline of 9/1 by a day or two, depending on how freaknasty the other 70% looks.

A wrinkle in the editing process: Yesterday, my sinuses were acting up so it felt like a large, angry person was pushing on the right side of my face, trying to collapse my eye.  Kind of crapped out reading and thus, editing.  I took an Aleve and by nighttime I was better, which is how I got to 30%.

The other day, I went shopping.  As I drove out, I noticed someone had hit a gray squirrel just downhill from our house, and figured I'd move it when I got home.  When I drove home, however, the vultures had found the squirrel and were having brunch - thereby rendering a perfectly whole squirrel into a large mess.  Three vultures on one squirrel seems a bit much.  The passing of my vehicle made said vultures fly into a tree in my yard.  Pretty cool having them sitting there.  A while later, Hubs looks out the front window to find another vulture stopping by the water pan for a drink.  (I know it was a different vultures because the first three were obviously black vultures and this was a turkey vulture.)  It must've missed the buffet.  Anyway, I got pics: 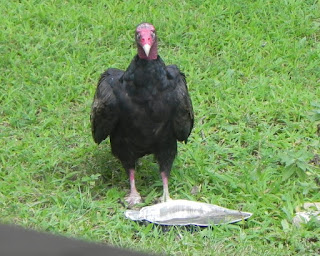 Damn ugly birds, but they do a necessary job, so they can stop by for a drink anytime.

Speaking of critters being welcome, or not, we have squirrels.  Tons of squirrels.  Mostly gray, but some fox.  I don't mind them for the most part.  As long as they stay out of the house.  And I'd like them a ton better if they weren't eating all the birdseed.  I have tried everything to keep them off the crook that holds the feeder, but they're wily buggers.  (Okay, I haven't tried hot pepper powder or flakes - that just seems mean.)  My latest invention is a baffle made of a plastic gallon jug, held onto the pole by a wad of duct tape and a mylar cat toy.  They're still getting on the feeder, but it's making it more difficult for them and it's also amusing the hell out of Hubs and I. For the first time in months, we had food in the feeder for longer than a day, so even if it isn't a total win, I'm counting it as a one.

The first two weeks' worth of sales for Wish in One Hand have been disappointing thus far.  But it's early yet.  Once I get some more reviews, I'll run a sale and an ad.  The two reviews I do have - one at Amazon and one at Amazon UK with both of those also at Goodreads - are amazing.  Thanks!  Again, I'll talk more about sales and junk tomorrow at Outside the Box.

What's the update in your world?
Posted by B.E. Sanderson at 7:30 AM