It's nine days until my projected launch day and once again, not sure I'll have this sucker finished in time for pre-order.  Oh, it'll be launched on time.  It WILL be launched on time.  But Amazon likes a better lead for the pre-order thing.  Although, the last book was only uploaded a few days early, so maybe...

Can ya tell it's 9 days until launch?  I'm a little scatter brained.  And single-minded.  And I need a shower something awful.  Which reminds me of a meme I saw on FB this morning.  "I think I'll take a shower now, said no writer on deadline ever."  I'm sure that's not strictly true, but it works for me this morning.  I will, in fact, take a shower after Hubs gets up.

I did a little something on FB yesterday.  I sent a post out into the world offering postcards to the first people who emailed me their snail mail addy - complete with assurances I wouldn't use their addy for anything but the postcard.  :crickets:  So, if any of y'all want a postcard, let me know.  I have a ton and they're already stamped.  I don't want to send them higgledy-piggledy to people who don't want them.  The last thing I want is for them to arrive at their destination and have the receiver think 'Oh joy, more junk mail.'

Max the wonder cat has been a roller coaster of distraction lately.  He feels well, then he doesn't. The meds work, then they don't.  He eats like a horse, then I can't bribe him with freshly grilled salmon or turkey lunchmeat (his fav).  He did well yesterday. Keep your fingers crossed today is good, too.  It's exhausting.

I have an ad up at Omnimystery News.  It's a month long ad spot, but I can change it mid-month, if I want.  The first couple weeks ad is this: 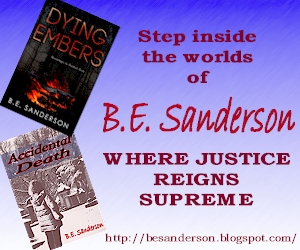 And the link goes to my Amazon Author Page.  The next couple weeks will spotlight Wish in One Hand.  (The main dude at OMN says the 'Omni' means all types of mystery/suspense - including paranormal - so we're good.)  It's not flashy, but I think it gets the point across.  I haven't seen a spike in sales, though, so probably not.

The bats have taken up daytime residence under my bathroom window.  There's a little groove where the log-siding dips in behind the bottom board of the window casing.  They're all stuffed up in there like brown insulation.  They are, I think, big brown bats.  (Yes, that's actually the technical name for them.)  They look like this:

The light wood is the log-siding and the dark is the window casing.  They seem content up in there, but they'd better find a more suitable hiding place for hibernation.  They'll never survive up in there when it's cold.  I do have a way to get them to leave - a non-harmful way - but I'm not ready to go there yet.  I'm hoping they'll leave on their own.  They have until mid-September to vacate or I'll have to evict them for their own good.

My spider bite no longer looks disgusting.  Now I just have a rash from the glue on the damn bandaids. Not real BandAid bandaids. Cheap ripoffs.  But brand name adhesive does the same thing to me.  I thought once I was allergic to latex, so I switched to cloth, but no.  It's the adhesive.  Yay.