Long ago, when I was a teenager, I read The World According to Garp by John Irving.  I don't know if any of you have read it (read it, not watched the movie - which didn't nearly do the book justice) but in the middle of the book, Garp has two sons - Duncan and Walt.  In a horrible accident, Walt dies and Duncan loses an eye.  Forever after, Duncan focuses on the defects in other people.  In fact, there's a scene where he's in a NYC skyscraper using a telescope to point out the defects in the pedestrians below.

I do this.  I don't know if it's a function of my own defects or it's a function of having read this book.  I don't place any judgment based on a person's defects*, but I do note them.  (Much to my husband's dismay sometimes.) Watching the news is particularly rough.  This person has a mole, that person's ears are slightly different, that dress makes her boobs look huge, 'what the hell is up with his hair???'... don't get me started on a particular politician whose facial characteristics remind me of an evil Who (from Whoville - not the Dr.).

When I think about it now, I'm going to say it had more to do with the book at first and then the accident exacerbated it.  My first boyfriend had a birth defect where one arm was significantly shorter than the other.  And the short arm didn't work quite right.  A college boyfriend was missing two fingers from a snowblower accident.

Anyway, I've been thinking about defects a lot.  Yesterday especially.  Scarlet - one of our resident does - brought her fawn to feed here yesterday afternoon.  I got the camera and took a bunch of shots - zoomed and on the highest resolution.  He was so cute.  I ran inside, downloaded and looked through the shots I'd just taken.  And then I noticed something.  So, I used the program to enlarge to 100% and looked at his eyes.

I won't post any pictures where you can see.  It's pretty gruesome and fairly disturbing.  Super cute little guy with a... well, you can picture it on your own, so I won't go there either. 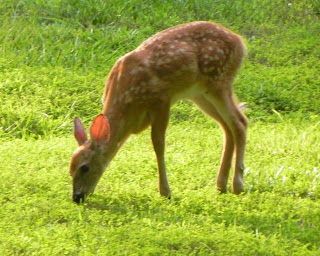 I named him Sammy**.  I would call him Duncan, but then I'd have to explain The World According to Garp to my husband, who hasn't read it and doesn't want to.  I don't blame him.  It's a powerful book, but it's disturbing.  Evidenced by the fact that I haven't read the book in like 15 years and it's still disturbing me today.  (If you haven't read it, don't.  You don't want that shit all up in your head.  It never comes out.)  Plus, he could be a doe - in which case Sammy still works, but Duncan would be weird.

I guess in a way, it's good for me to notice all the little defects, or quirks - if the word defects bothers you.  I'm a writer.  Adding defects and/or quirks adds richness to the writing.  It makes the characters memorable.  But it sure makes it hard to carry on a conversation sometimes.

Another day, I'll talk a little about Walt and how that particular character warped me. (Seriously, if you haven't read it, don't.  If you have, I'm sorry.)

What about you?  How do you handle defects?  Do you ignore them, focus on them, or just file them away for the day when they might be useful in your work?


* Judging people based on their physical characteristics is just stupid.  It's not what you see that makes a person, it's what they do and who they are.  Duh.
**After Sammy Davis, Jr. who lost his eye in a car accident when he was a young man.
Posted by B.E. Sanderson at 8:02 AM