When we were in the process of buying this place, I sent some pictures of it out to friends.  Silver James wrote back and told me this was called a Fairy Oak.  (I think... she'll correct me in comments if I'm wrong).

Anyway, here's a pic of the tree as of yesterday.  It's so nice now that it has it's leaves. 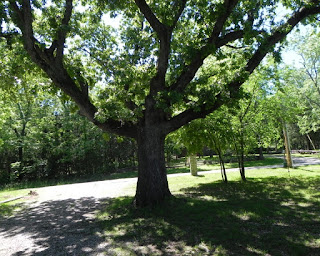 And because I'm so happy to have seen this, I thought you'd like to see it, too: 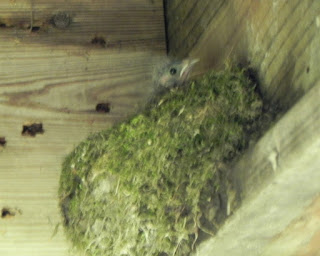 This is the third attempt at a nest for my Eastern Phoebe couple, and the second batch of eggs.  At least with this batch, we know at least one hatched.  I think I shall call him Spike.  (Sorry the pic's a bit fuzzy, but the nest is up under the deck, so I had to use the zoom and then hold the camera at a weird angle.)