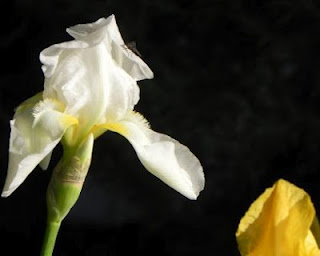 I don't know if you can see it on there, but there's a housefly on the white iris.  I didn't plan it.  Hell, I didn't even know it was there until I downloaded the pics and looked closely.  Without the damn bug, this would be a frame-able shot.  With the bug, it's just a curiosity.

Unlike this shot, where I aimed for the bee. 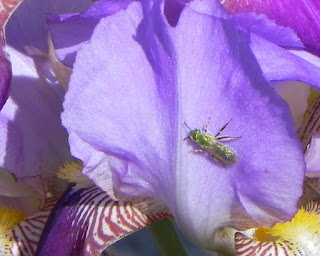 I'm not a fan of bugs in general, but I think that one is worth taking a picture of - especially since its color offsets so nicely against the purple flower.  Green bee = pretty.  Housefly = gross.
Posted by B.E. Sanderson at 8:46 AM