Skill and Luck and Serendipity

Yesterday I set out to take some art quality shots - sky through the trees, birds, interesting branch configurations, etc.  I tried taking what I thought would turn out awesome.  After about fifteen minutes, I had 33 pics on the camera.

I ended up with 7 that I can say I'm pretty proud of.  There might be another three or four that could be good with some tweaking.  In all honesty, none of them are stunners.

Part of this picture taking process is a learning curve.  The more I take, the better I get - at least in theory.  The better I get, the more pictures will be worth saving and the more that will be worth the extra effort of tweaking using some kind of software.  (I'm learning there, too.)

Still, running around shooting random photos isn't going to get me anywhere.  Sure, there's beauty all around us.  Taking photos from my front yard helps me remember that.  But the really great shots are a combination of skill and being in the right place at the right time.  The squirrel I posted the other day ended up as good as it did because I held the camera still and adjusted the zoom and pointed it toward interesting subject matter.  It ended up better than it should've because the silly beast picked the same instant I took the picture to stretch.  And the shadow?  Well, that was serendipity.

In a way, it's like writing.  (You had to know I was going to tie this in somehow.)  Success in writing is a combination of skill and luck and a little serendipity.  The skill is totally within our control.  Sometimes the luck is, too.  After all, Thomas Jefferson was right when he said "I find that the harder I work, the more luck I seem to have."  If I bust my ass researching agents and send my queries out to only those who really are looking for what I want, and one of them chooses me... well, that's the kind of luck you make for yourself.

The serendipity is totally outside our sphere of influence.  I could've nudged serendipity by walking farther afield and picking subjects that have a better chance of doing something interesting, but sometimes you get what you get and you're happy about it.  Like this... 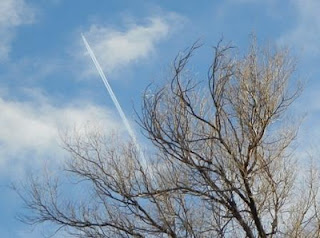 I had maybe ten seconds to line this shot up, but I didn't have anything to do with the jet flying over.  And I sure as hell didn't envision that the branches would look like they were trying to reach for the plane - which is why I called it "Come Back".  That pic is 25% skill and 75% out of my control.

I wandered kind of away from my point this morning.  Maybe you got one anyway.  I guess it all boils down to - control what you can by honing your skills, make luck where you can find it and the serendipity will take care of itself.
Posted by B.E. Sanderson at 8:32 AM