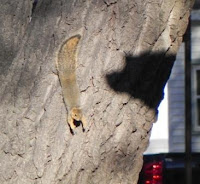 :waves:  Hi Everyone!  I woke up this morning and noticed that I've neglected the blog again.  No excuses - just dealing with non-tragic, but very distracting and brain-draining, life stuff.

Which reminds me.  If you didn't catch the first episode of the new season of Biggest Loser on Tuesday, they are modeling this season on the idea of No Excuses.  Seems pretty good to me.  I mean, there are million excuses why we don't do the things we know we need to do, but very few actual reasons.  And sometimes even with things that seem like reasons, we can usually find a way to still accomplish things if we think hard enough.

For instance, 'my computer died' might seem like a good reason not to write.  But if you think about it, people were writing long before there were computers.

So, I'm going to try and not use excuses this year.  If I don't write on a given day, I need to recognize that was a choice I made.  It wasn't because I was too tired, or too stressed, or life stuff intervened.  I didn't write because I chose not to not to write.  Maybe I made the choice because I felt overwhelmed by some other aspect of my life, but it was still a choice.  Perhaps I chose not to write because my hands hurt or I had a headache.  But that's why they make Aspercreme and aspirin.

And I also need to realize that sometimes making the choice not to write is okay.  As long as I don't make a habit of it.  I chose not to write on New Year's Day because I felt like I'd earned a day off.  It was a lovely day spent reading, btw, but the next day, I got back at it.  (And then Tuesday struck and bits of hell broke loose.  Now that day of not writing wasn't a choice, but shit happens.)

If I didn't lose weight this week (or in fact, gained a pound - I haven't checked), it wasn't because this life stuff had me stressed out.  It was because I chose to stuff my face and not drag my lard butt off the couch for a few simple exercises.  Hell, sometimes stress makes me lose weight and become a little frenetic with the house cleaning, so not losing weight this week is my own damn fault.

No excuses.  And every time I think I've got a reason, rather than an excuse, I'm going to try and remember to pick that reason apart until I'm sure it's valid.  No letting those excuses sneak up on me disguised as reasons.  (Sneaky bastards.)

Anyone with me?  Any urge to make 2012 the year of no excuses or am I the only nut in the trail mix today?

And in case I haven't said this in a while, thanks for following The Writing Spectacle.  I really do appreciate your presence here and I hope to provide you with reasons to come back - not excuses to leave.  ;o)

(On a completely unrelated note, doesn't the shadow in that picture up there look like a bear?)
Posted by B.E. Sanderson at 8:27 AM