Writer Chick is Wigging Out 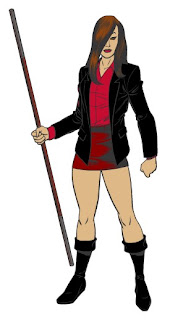 Does this avatar make my thighs look big?  Seriously, my waist is tiny in comparison to those thighs.

The staff?  That's to whack grungy little excuses on the head before they nibble at my gumption.  But seriously folks, I'm brain fried.  I have ten chapters to finish by the end of August with hopes of being ready to submit this puppy sometime in September.  Yep, I'm wigging out.  4-6 week self-imposed deadline anyone?  Considering the fact that I had originally hoped to be finished with this project in June and submitting by now, it's no wonder I'm pushing.  I feel like I'm way behind.  For crying out loud, I've been at this WIP since the beginning of last September.  I haven't spent an entire year on one book since the first book.  I feel like I'm draggin' butt.  Bleh.  I want to query.  I want to net me a nice big agent.  And then I want to see some publishing contracts.

On second thought, maybe I should use the staff to whack myself around the head and neck until I just chill out.  Or lose consciousness.

Don't mind me.  I spent the whole afternoon working on a homemade lasagna that shall henceforth be known as The Lasagna That Ate New York.  I swear the damn thing weighed ten pounds.  Okay, it just felt like ten pounds.  But if I add up all the ingredients - 2-3 lbs of beef, a pound of mozzarella, a big saucepan full of homemade sauce (with baby bell mushrooms), a can of sliced olives, a tub each of cottage and ricotta cheeses, noodles... holy crap that sucker was huge.  Of course, now I'm brain-fried and my belly feels full enough to make me want to waddle.  (I won't but I want to.)

So, is it any wonder Writer Chick is wigging out?

Pardon me while I lay on the couch and digest.  If I can think straight, I might even get some editing done.
Posted by B.E. Sanderson at 8:47 PM