Look at her. Isn't she pretty?  Of course, now I have Kodachrome stuck in my head, but right now, I'm okay with that.

She's a digital point and shoot with some of the bells and whistles of a DSLR (Digital Single Lens Reflex).  I'm betting I can take some really awesome shots with this puppy.  Hell, if I can get awesome shots from the camera I currently have - even with the sun glaring off the frigging video screen thingabob - this should provide me with incredible pics.

Sure, it's got the video screen like all the others, but it also has a viewfinder!  Can I get an Amen?  Thank ya.  I've been missing my viewfinder since my HP C200 went kaput.

And here's a quick pic of the computer that will be winging its way home on Monday...

I know it doesn't look like much here, but it is exactly what I wanted in a computer.  (Minus the floppy drive, which no one installs standard anymore.  Damn them.  I bought an external drive, though, so it's all good.)

It's a Lenovo ThinkCentre.  IBM became Lenovo a few years ago (something about changing the name to increase marketability in other coutnries... whatevah).  It doesn't have all the bells and whistles I might've gotten for the same price with a different machine, but it has some things other machines don't - like compatability with older peripherals.  Did you know some of the newer computers don't even have LPT ports anymore?  :gasp:

What can I say, I'm old school.  I've been dreaming of an IBM machine since they first came out.  And now I'll have one.  It's like an IBM ThinkPad in a desktop/tower form.  Yay.  Especially since I've never been a huge fan of laptops.  (I know, I know... it's shocking for a writer to not want a lappy, but I am what I am.) 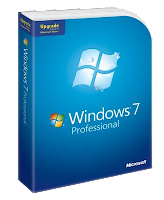 Oh, and this machine comes with Windows7 Professional.  From what I researched, the Win7 Home Edition doesn't like older programs - like pre-Vista applications.  But the Professional is built on the more stable XP technology, so it works with older programs.  Yay again.  Now let's see if my old DOS-based contact management software even loads on it.

It'll still take some getting used to.  I'm running Windows 2000 Professional right now and I love it.  I wouldn't even think of switching except this operating system is so old most new things won't work with it anymore.  Stupid need to fix what ain't broken.  Don't get me started on how Microsoft has idiot-proofed its OS to the point where the software irritates the crap out of me.  I could go on for days.

Yes, I am a techno dinosaur.  But that's probably a post for another day.  Now I have to begin the process of burning all my personal stuff to CDs in preparation for the arrival of my new baby.

Have a loverly day, everyone.

PS.  I'm working on also getting MS Office Pro so SQUEE.  if my contact management software doesn't work, I can convert it all into Access!  I love Access.  :beam:  Happy Anniversa-Birthday to me.  The best thing about getting married the day before your birthday is the double presents.  LOL
Posted by B.E. Sanderson at 9:07 AM