At the beginning of the year, I made a goal for myself to get healthier.  This, of course, meant losing weight and getting more exercise.  Not an easy thing to do when you're sitting on your buns in front of a computer screen for hours at a time.  Still, over the past 12 weeks, I've managed to lose a little weight (7 lbs as of this morning) and not get totally out of breath after a few pushups.

Scattered throughout the next few weeks, I'll be posting about things that are helping me accomplish my goals:

I know the crux behind any good weight-loss regimen is to eat less - which some people often take to mean 'skip meals'.  Everything I've read says that's a horrible thing to do to your body.  In fact, skipping meals can actually convince your body you're starving - so it kicks into storage mode.  Miss a meal here or there and you become a friggin' chipmunk, storing up fat for the long hard winter.  Except there is no winter - just fat.

Now, I've never been a breakfast eater.  Actually eating anything before I've been up and around for a few hours makes me nauseous.  Even putting milk in my coffee makes me gag.  How I got over that was to just suck it up.  Sometimes the things we want aren't easy, but we just do them because they need to be done.  (Cleaning the litterbox grosses me out sometimes, but if I don't do it, no one will - and then it'll be even grosser.)

They say you should be eating a healthy breakfast first thing in the morning.  As in, wake up-brush teeth-eat breakfast.  I admit to still being a bit of a weenie about this.  I wake up and do all my usual morning things, but I don't actually eat for about 60-90 minutes.  It's the best I can do right now.  And hey, it's better than not eating anything until lunch. 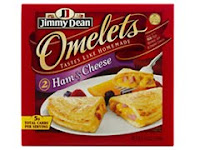 As for the actuall contents of my morning meal, there's where you can run into trouble.  I mean, who doesn't love pancakes or French toast?  Bacon or sausage?  Or gooey, cheesy omelets?  Hell, I could eat that stuff for dinner most nights of the week.  Problem is, pancakes are beaucoup calories and don't get me started on maple syrup.  Sausage and bacon?  Well, their health detriments go without saying.  And I can feel my arteries clogging just thinking about a big fat omelet smothered in Cheddar.  Mmmm.

How to get past that...  Hmm.  Well, first off, if you have to eat the pancakes, waffles and french toast, keep it down to one.  I know, how can anyone eat just one pancake?  They aren't pistachios, folks.  As for sausage and bacon, go with a turkey variety like Jennie-O Breakfast Meats.  And if you're talking omelets, I've found that microwaving one egg with a little sprinkle of cheese will do fine, or if you're in a hurry: Jimmy Dean Omelets.  (We buy the ham and cheese kind.  Daughter and I split one - at 250 calories per omelet that leaves us with 125 calories each.)

The idea here is that breakfast of any kind jump starts your metabolism.  Food in your stomach first thing says to your body "Hey, we've got plenty of fuel, let's burn some."  I started out with Quaker Instant Oatmeal (or an offbrand version).  Personally, I like the Fruit & Cream Variety pack, and at 130 calories per serving, you can't go wrong.  Oatmeal, folks. It's heart-healthy, high in nutrition and makes you feel full so you won't be looking for more food fifteen minutes later.

So, have you had your breakfast today?  Are you like me and can't stand to eat first thing?  If you could eat anything for breakfast what would yours be?

(Personally, if it were up to me and not my diet, I'd be eating at IHOP everyday.  Good thing for me, the nearest one is a couple hours away.)
Posted by B.E. Sanderson at 9:27 AM