It's May!  My favorite month of the year.  The month of emeralds and Lily of the Valley.  My birth month.  The month when Spring is at its best.  (Well, except for the storms.  I can do without those.)

Speaking of storms, last night's missed us entirely.  We didn't even get the wind they were predicting.  Now let's see if the storms due later this morning will be a hit or miss.

Yesterday, we had a female cardinal go mental on us.  She kept flying up and hitting this one window in the sun room.  Flap, flap, thump.  Flap, flap, flap, land in the tree.  Over and over.  Then she'd take a break and sing.  Who knew female cardinals sing?  :shrug:  She was still doing it as the sun set.  I hope she doesn't come back this morning.  It's disconcerting watching her thunk into the windows.  I did try scaring her off.  As soon as I left the room, she came back.  Oh, gads, I just heard her.  =oO

The batteries arrived for my camera!  I am back in business, baby.  So I walked around and took pictures of the flowers in the yard.  Here's the iris bed: 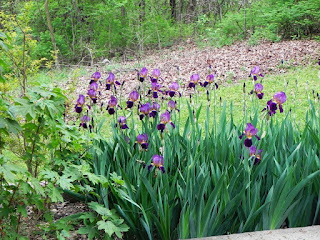 I told ya they were going crazy this year.  Here's another bed: 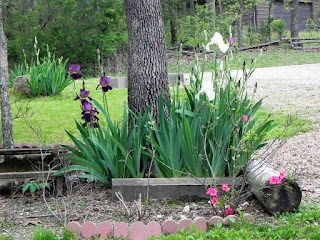 The irises by the rock up near the road aren't blooming yet, but I'll get pics of those, too.  I'm hoping some of the blue irises bloom this year.

In that last pic, you can see my pathetic azaleas.  They're mostly dead.  =o(

When I got the new battery in my camera, I discovered I had pictures from December and January on it.  Here's Half-Rack the Deer from December. 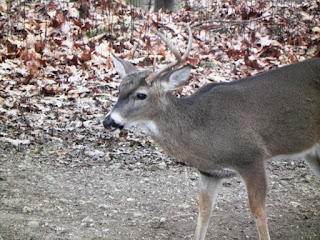 Poor dude went along with only one side of his antler rack way before the other bucks started dropping antlers.

Did I mention how much I missed my camera?  I'm so happy it was just a battery problem.  It's 8 years old, so I'm seriously surprised the battery lasted that long and that nothing else went kerplooey.  I got it and a new computer for my 40th birthday.  The computer went wonky first.  Nikon makes an awesome camera.  Unfortunately, they discontinued this model.  I went looking for a replacement camera, just in case it wasn't the battery and I can't find an exact replacement anymore.  :sad:  Thank goodness I don't need to replace it!

I think that's enough rambling from me this morning.  You got anything to ramble about?