The Wing Slayer Hunters are Finally Back! 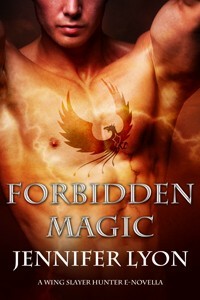 Jennifer Lyon writes this awesome series about a group of guys called the Wing Slayer Hunters.  I'm not the best at boiling stories down, so I'm going to borrow from Jen's own site for more information...

Once they were immortal guardians; hunters of demon witches and protectors of innocent earth witches. For centuries, the hunters and witches worked together to safeguard earth from demons, in particular, Asmodeus.

And then a dark curse destroyed the bond, turning the ancient allies into enemies. For the blood and sex curse cast by demon witches caused witch hunters to crave the power contained in witch blood. If they give in and kill a witch to harvest her blood, they go rogue and forfeit their eternal souls.

The witches that once banished demons and assisted mortals, now have lost their familiars and high magic.

They must hide from the powerful men who once protected them, but now hunt them for their blood.

No one is left to stand between mortals and demons.

Until one group of witch hunters rises to become the guardians once more. With these words:

“I vow my allegiance to Wing Slayer, god of the witch hunters. I take the ancient oath of protection for the innocent and justice for the damned. And I swear to fight the curse to my death.”

Anyway, a while back, the stupid publisher didn't renew the contract for her series, so people like me who were addicted to the stories were left hanging in the wind.  There were still too many stories left to tell.  What happened to Linc?  When will Ram find his witch?  What the hell happens!?

Needless to say I was sad... and pissed.

Wing Slayer Hunter, Ram Virtos, must find his soul mirror witch and convince her to mate with him before his Thunderbird tattoo kills him. But while that witch might be able to save Ram’s life, it is the mysterious Ginny Stone who inflames his passion.

Ginny has been deeply fascinated by Ram for months, but dared not act on it or she’d be torn from her mortal life on earth and thrust into her dreaded destiny as a half-breed angel. But when her beloved brother’s soul is at stake, she must do the one thing she both fears and desires…

Take Ram to her bed.

Sure, these books are a little spicier than I usually go for.  (And yeah, Smashwords has a disclaimer that this is unsuitable for readers under 17.)  But it's not the spice that keeps me reading, it's the plot and the characters and the love stories woven into each book.

Now, if you're interested - and still reading after this long post - Forbidden Magic is available at the deep discount price of just 99 cents until May 1st.  It's Jen's way of rewarding her loyal readers and encouraging people who haven't fallen in love with her previous stories to give her a whirl.  If you have a Kindle or the Kindle for PC program, pick it up at Amazon today.  If you have a Nook, Barnes and Noble finally got the upload, so you can buy it at B&N now.  Otherwise, you can always buy it over at Smashwords.

Help a gal out by buying a copy and spreading the word, thereby making this novella so irresistible they can't help but publish the rest of this series.  Jen will appreciate it and so will I - cuz like I NEED to read the rest of these books.  Not knowing how everything turns out is killing me.

Disclaimer: Jen didn't ask me to do this.  I'm not getting anything for free.  I just love this series and want to see them sell really well so the publisher will keep publishing them so Jen can keep writing them - so I can keep reading them.  That's right.  It's all about me.  ;o)
Posted by B.E. Sanderson at 8:29 AM