Still trying to work through some issues with my new WIP.  Writing straight fantasy is a lot harder than urban fantasy.

Anyway, here's a photo from what started out as a nice day trip in the Wasatch Mountains and ended up with a harrowing ride up a snow-covered road not nearly big enough for the sedan we were in.  Picture snowbanks brushing the passenger side and a sheer drop off the driver's side.   One slip of the tires and we'd have plummeted a hundred feet into an episode of "I Shouldn't Be Alive".  :shudder:

I wish I'd gotten pics of that, but frankly, I was too scared to think about my camera at the time. 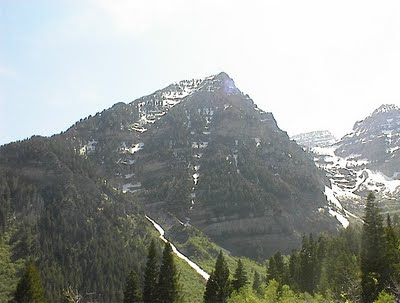 Ever done anything so totally stupid you wished you hadn't done it, but that you now wish you had pictures of?
Posted by B.E. Sanderson at 8:43 PM