It's been an interesting few days here at the Sanderson household (at least weather-wise - the rest has been pretty blah).  Thursday gave us hoar frost: 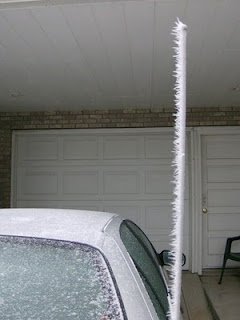 Yes, that's my car antenna with about an inch of icy spikes.  Don't worry - they weren't as sharp as they look.  Yesterday's Quickie Pic was a result of that frost.  (And no, the picture wasn't touched, edited, or tweaked in any way.  It came out of my camera exactly like that.  Heh.  I forgot to turn the flash off, and I thought that pic was going to come out gross.)  Here's what the same tree looked like without the flash: 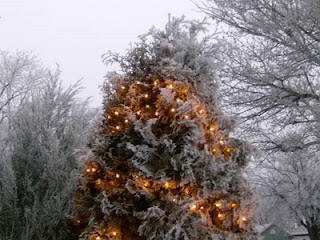 Not quite as striking, eh?

Anyway, Wednesday and Thursday were supposed to be days of great snow dumpage.  We got the frost and a dusting.  Go figger. 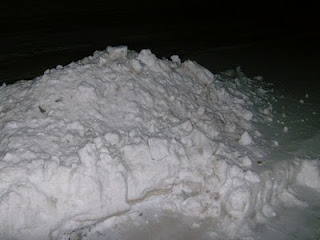 Christmas was supposed to be a quiet weather day.  Instead, we got another dusting of snow and a windstorm which gave us more than a dusting of dust.  All the pretty frost and snow ended up covered in a layer of brown.  It almost looked like the world was covered in cinnamon and sugar.  Really made me long for a donut, ya know.  (This is today's pile, but if you look close, you can see the dirt in striations at the bottom.)

And then came yesterday.  We woke up to what was probably about 3 inches, but with the wind blowing like it was, it left drifts of 2-3 feet in some places.  Every time I tried to make any headway shoveling, it blew all my work to hell.  Once Husband got home from work, I gave up. 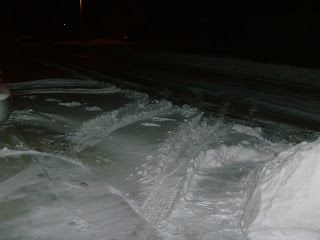 This morning, the wind is gone.  The early morning sky is filled with stars instead of clouds.  I've been shoveling since I got up an hour ago.  (I shovel in ten minute bursts, so it takes me a while to get it all done.)  Husband is off with the road crews making the world safe for anyone who's stupid enough to drive right now.*

Me?  I'm off to shovel some more and then maybe... just maybe... I'll get some writing done.  What's on schedule for you today?

*Next time you wake up to a snow-covered landscape and yearn to drive out in it, send a silent thanks to the men and women who keep your streets clean.  Our guys have been at it since 3:30am.  It's a thankless job, but at least our guys have donuts to keep them going.
Posted by B.E. Sanderson at 6:52 AM