Hi there.  It's 1:23 local time and I'm awake.  Stupid leftover pizza is killing me.

Anyway, after having been disappeared all day, Max just happened to be outside when I got up.  (I think that's another reason why I couldn't sleep.  Silly me, worried about my silly wandering cat.)  He's home and he's hungry.  Big surprise there.  Sucked down an entire can of food he's not particularly fond of.  Maybe that's the trick - feed him the less favorite food in the middle of the night.  :shrug:  One would think a cat who was starving only a few short months ago wouldn't be so damn picky.  So, he ate and then went right into his new box without so much as a thank you.  Sheesh.

Thing two...  Or was that three?  My daughter started her year of student driving almost a year ago.  I finally added up the hours thinking we were so close.  OMG, we're only about half.  Fifty hours is a lot more than it feels like.  This, of course, means we're doing a lot more driving to catch up so she doesn't get her license too late.  Bleh.

Speaking of student driving time, we were out for a couple hours this morning, and I took this picture while she drove.  Not bad considering she didn't stop the car. 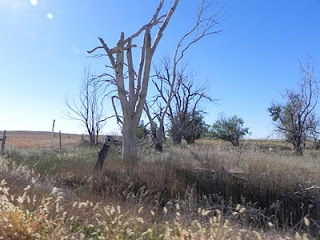 Okay.  It's been almost two hours since I got up and I think it's safe to go back to bed.  I hope you're all sleeping well.  And if I still can't sleep, there's always editing to do.